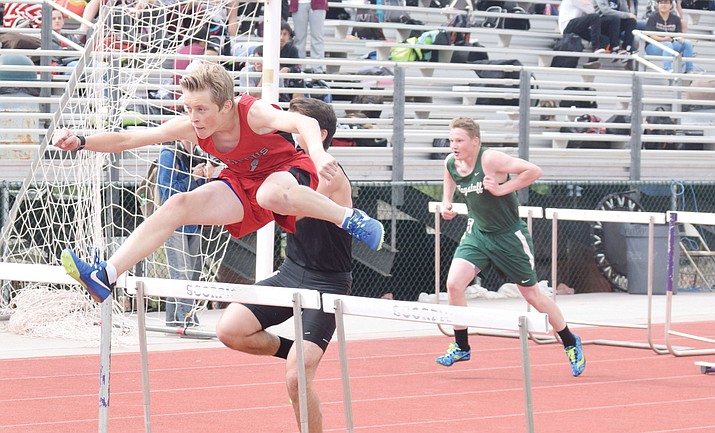 SEDONA — Mingus Union boys track and field had a successful outing at the Friendship Invitational at Sedona Red Rock on Wednesday, especially their underclassmen.

“The boys were really good, we saw some PRs with our throws and the sprinters did a good job,” said Mingus Union head coach Yancey DeVore.

Sophomore Kendrew Streck won the shot put with a personal record throw of 44-05.50 and took second in the discus with a 127-03, also a PR.

DeVore said he did a good job.

“It now puts him in a good position for state,” DeVore said. “He continues to improve, which is good.”

Mingus won the 4x800 Relay, with Keegan Cain, Jon Ulibarri, Dallin Gordon and Ryan Alexander with a time of 9:00.85.

Senior Jordan Pollock was seventh in the 100 meters, finishing in 13.06. In the Frosh/Soph heats, sophomore Colby Fanning took second in 12.54.

Sophomore Nick Lodico was second in the Frosh/Soph 110m Hurdles.

“For the boys our middle distance is really strong, I’m impressed with what they’re doing From the 400 to the 16, we’re looking really strong,” DeVore said.

Sophomore Nick Bloniarz was second in the Frosh/Soph High Jump.

In the Frosh/Soph Long Jump, sophomore Isaac Utter was third with a 16-01.00 PR.

Mingus Union sophomore Christian Ruiz finished 12th among the Frosh/Sophs at Friendship Invitational at Sedona Red Rock on Wednesday. He set a new personal record with a throw of 30-01.50 (VVN/James Kelley)

Up next for the Marauders is the 77th Annual Nike Chandler Rotary Invitational in Chandler on Friday and Saturday.

“Our main middle distance runners, it was a little different meet for them because they’re going to be running on Friday, some positive things out of that

Their next meet in Verde Valley is the Mingus Invitational on April 7.

“We just need to continue to improve and continue to get better,” DeVore said. “We’re still working on jumps and the sprints as well.”