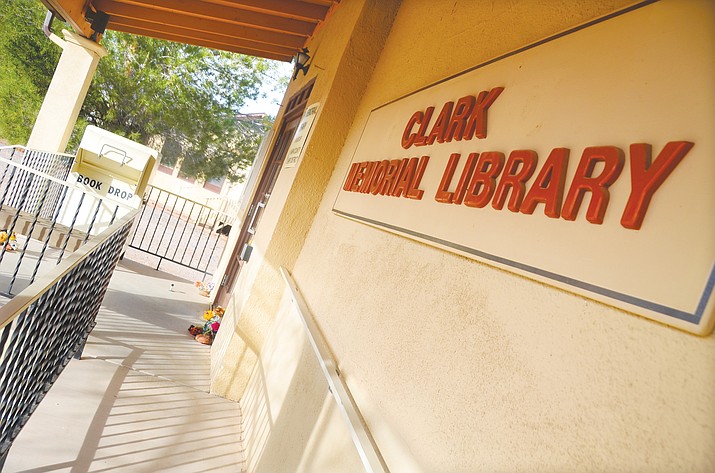 The fate of Clark Memorial Library could be decided Tuesday during the Common Council of the Town of Clarkdale’s special meeting. (VVN/Vyto Starinskas)

CLARKDALE – The Clarkdale Town Council will meet Tuesday to possibly vote on the future of the library and to hear a presentation on the United Verde Soil Program.

The special meeting will take place at 3 p.m. in the Clark Memorial Clubhouse in the Men’s Lounge, located 19 N. Ninth Street in Clarkdale.

According to the agenda, Council is set to discuss and possibly take action with regard to the Community Service Department’s priorities and programs, and the Clark Memorial Library for Fiscal Year 2017-2018.

What will happen to Clark Memorial Library? The answer could emerge Tuesday afternoon. Council can either vote on the issue that day, or hold back until the budget for the next fiscal year has been looked at.

In January, the Community Services Commission voted unanimously to forward the following recommendation to the Town Council: “That the Clark Memorial Library be closed at this time in order to focus resources towards pursuing new and more robust programs and events that better align with existing levels of resources, staffing levels and community survey.”

The department initiated a Library Patron Survey to give the public another opportunity to voice their opinions. The template and its results were shared Council in February.

“Since the Feb. 28 work session, potential closure of this library has received broader attention and concern expressed by some community members (including the door-to-door distribution of fliers in some areas of Clarkdale), which has resulted in a number of emails about the issue. The emails have been forwarded separately to the Council,” stated a Town of Clarkdale staff report.

Clarkdale’s decision has an impact on the Yavapai County Library District’s distribution of resources to the public libraries in the system, stated the report.

“From a Library District contract perspective, Town staff believes that, if a closure is planned, we should try to plan for any cessation of library operations to coordinate with the beginning of the Fiscal Year (July 1),” stated the report.

The Community Services Commission and staff were charged with prioritizing operations given the current level of resources.

“This direction was given during Strategic Planning with the recognition at the time that, were new resources to become available, they would likely be shifted to a number of other organizational needs before they would be shifted to the Community Services Department,” stated the report.

Staff is now looking for direction from Council as a result of this process and the Community Services Commission’s January recommendation.

“If the Council wants to see the Clark Memorial Library continue to operate in some form for FY 2018, then staff needs to pursue the execution of a contract with the Yavapai County Library District for that purpose,” stated the report.

The recommendation listed on the agenda is to direct staff with regard to the Community Service Department’s priorities and programs, and the Clark Memorial Library for Fiscal Year 2017-2018.

Council will hear a presentation from representatives of Freeport Minerals Corporation relating to the current status and future plans for the United Verde Soil Program in Clarkdale.

Mayor Doug Von Gausig said this is a really important discussion for people to have.

Oct. 11, 2016, Council listened to a briefing on the replacement of possible tainted soil resulting from historic smelting operations in Clarkdale. The United Verde Soil Program has been testing soils in Clarkdale, offering remediation at no cost for eligible residents.

CLARKDALE – The Verde Valley public comment session regarding the APS rate case is scheduled for Wednesday at 6 p.m. at Yavapai College in Clarkdale.

The meeting will be held in the Verde Valley Campus Building M, Room 137. The college is located at 601 Black Hills Drive.

“It is important for APS ratepayers to know that the Arizona Corporation Commission, not APS, will determine if rates increase. In the last year, due in part to customer input, consumers have helped to beat back unfair utility charges in the UNS Electric and TEP rate cases,” she said in an email.

Brown said the Fund has heard from a number of residents in the Verde Valley who are concerned about rate increases.

“As the Arizona Corporation Commission hosts public comment sessions across the state and prepares to vote on the APS rate case, we encourage APS ratepayers to urge the Commission to reject the unjustified rate increase and say no to unfair utility charges,” she said.