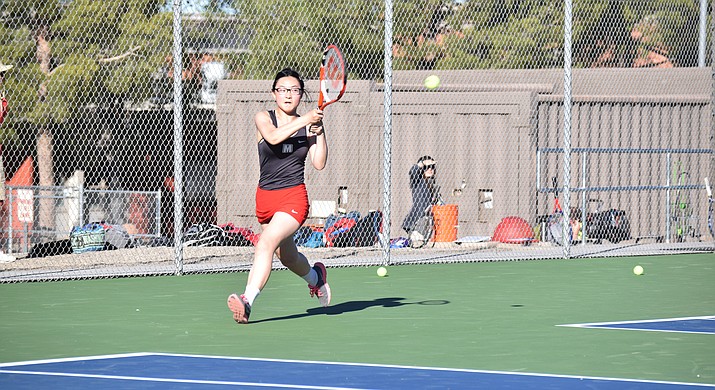 COTTONWOOD – Mingus Union girls tennis lost matches for the first time this season but the results aren’t all negative.

After 12 days away from matches during spring break, the No. 21 Lady Marauders (4-2) returned to action on Tuesday, losing 5-4 at home to No. 18 Marcos de Niza. Then match with No. 2 Notre Dame Prep, which was originally scheduled for Thursday, was moved up to Wednesday because of the threat of rain. The Saints beat Mingus Union 9-0.

“We knew that this would be the tough part of our schedule, and indeed it turned out to be so,” said Mingus Union head coach Andrea Meyer.

“Marcos de Niza I could see from the AIA rankings was going to be comparable to us in strength and skill and they just squeaked by us 5-4,” Meyer said. “The match could have gone either way.”

Meyer said she is impressed by the Lady Marauders’ evenness in play.

“When you have nine girls playing, you’re bound to get somebody on any given day that’s not playing as well and that has not been true,” Meyer said. “Every girl in every match for three weeks has played consistent, upbeat tennis, using the skills that they’ve learned I’ve just been really, really pleased with their progress and with the high level of their game.”

While Mingus Union did not have matches or team practices during spring break, Meyer said the Lady Marauders practiced on their own.

“We’ve also been working on visualization and imagining where their shot is going to go before they hit the shot and some things like that we’ve been working on confidence, so I think that helped,” Meyer said.

Against the Padres, MU junior Emma Williams lost the first set 6-1, then won 7-5 and the tie breaker 10-8 after trailing by four or five

“It was neck and neck, neck and neck and in the end she just kept getting that ball back,” Meyer said. “There’s a lot of pressure on that match, everybody on both sides of the aisle were watching that match, so I’m really proud of that effort.”

Junior Pei-Wen Yang won her first MdN set 6-2, then 7-5. She will receive the Victory with Honor award at the Mingus Union High School District governing board meeting 6 p.m. at the library on Tuesday.

“This is why she’s the Victory with Honor recipient because she just has a lot of spunk on the court, she just never gives up and she’s hitting as deep a ball in the second set as she was in the beginning, a lot of physical endurance as well,” Meyer said.

Meyer said she’s very pleased with junior Talon Whiteley and Williams who won their No. 1 doubles match 8-4 and senior Phoebe Chilton and Yang, who took the No. 2 doubles 8-6.

They lost the third doubles match 9-7, which would have won them the match.

Mingus Union lost 9-0 to Notre Dame Prep (10-0), but that’s not an unusual score line for the Saints.

Notre Dame leads the Division II Section II standings with a 3-0 record. Mingus Union is tied for fifth with a 0-1 record in the section.

“As expected they were deep, they were tough,” Meyer said. “These kids from Notre Dame have played since they were four-years-old, five-years-old, they have way more experience than we did, so the scores don’t look tremendous but we had several close matches and that just doesn’t happen with Notre Dame, if you look at the AIA scores, they beat every school 9-0.”

“She was one service break away from winning at No. 1 singles, which is wonderful and we almost won the No. 1 doubles with Talon and Emma,” Meyer said. “We lost that 6-8 and at one point we had that tied up six all and we were leading 40-love. So it just slipped away.”

Meyer is thankful to be playing the Eagles at home rather than in Flagstaff.

“Not only is the weather better, but the ball doesn’t have as much loft and so easier to control the ball down here where the air pressure is a little bit greater,” Meyer said. “Flagstaff does not have as strong a team as they have had in the past judging from their scores, they are very well coached and they usually play a strong offensive net game, so we’ve been working on our net game.”