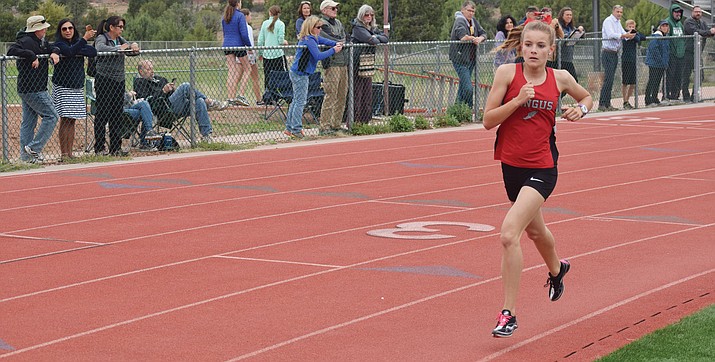 With each passing week, Mingus Union High School’s Meg Babcock is looking more and more like the kind of runner who will find her way to the podium at the state track and field championships in May.

Only a sophomore, Babcock this week is the No. 4-ranked girls 800-meter runner among Arizona Division III athletes. She turned in a season’s best performance last weekend at the 77th annual Chandler Rotary Invitational with a 2:26.66 clocking. She’s also currently ranked 10th in the state in the 400-meter dash with a best time of 62.8 seconds.

Rio Rico sophomore and defending state champion Samantha Schadler is atop the state rankings in the 800 with a 2:18.09 performance. She is followed by five runners – including Babcock -- who are all squeezed together with times ranging from 2:24 to 2:28.

Babcock is not the only Mingus girl included in this week’s latest Arizona state rankings by athletic.net. Senior Hannah DeVore has a seasonal best time of 49.52 seconds, which ranks her 10th in the 300-meter hurdles. DeVore also joins Katelyn Prouty, MacKenna Jung and Holly Johnson as Division III’s eighth fastest 400-meter relay quartet at 52.49 seconds. Mingus senior Maria Meacham is ranked 10th in Division III in the triple jump with a season’s best performance of 31-feet, 8-inches.

For the Mingus boys, senior Ryan Alexander is ranked fifth this week in Division III at 800 meters with a best time of 2:01.87. Mingus soph Kendrew Streck is ranked 10th in the shot put with a best effort of 44-feet, 5.5 inches.