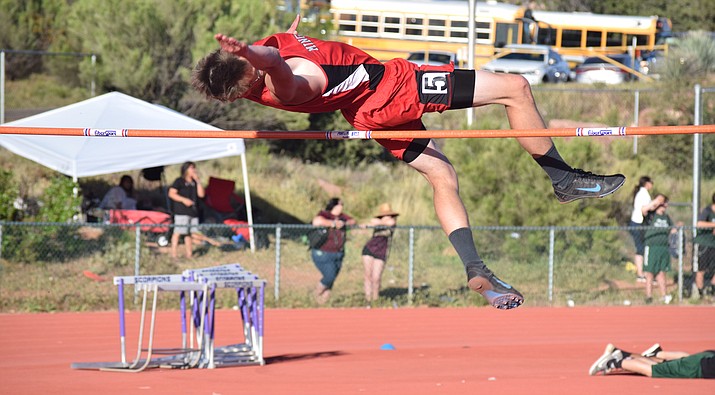 Mingus Union junior Jonathan Jung finished tied for first in the high jump at the Alhambra Last Chance with a leap of 5-08.00. Jung is ranked 14th in the state, in Division III, in the high jump. (VVN/James Kelley)

Mingus Union track and field shined at their last chance and even got a surprising automatic state qualifier.

Last week the Marauders won a handful of events and secured spots in the state meet at the Alhambra Last Chance in Phoenix.

“It went really well,” said Mingus Union track and field head coach Yancey DeVore. “Our guys that are in the 4 x 8 PRed, that was a personal record for them. (junior) Hannah (DeVore) did really well, she got an automatic in the long jump. We’re not going to put her in state in the long jump, but she did get an automatic jump, which is pretty impressive. The girls 4 x 4 had a season best, our boys 4 x 4 had a season best and our some of our 800 guys ran their best all year.”

Hannah DeVore chose to not compete in the long jump at state, a decision her father liked.

“Well I’m qualified automatically in five events, so I could do any of the five but two of them are relays and I didn’t want to let my team down so I decided to do the relays over long jump and long jump I’m not consistent,” Hannah DeVore said.

The long jump is a new event for Hannah DeVore but she is ranked No. 11 in the state in it and won it at Alhambra with a personal record of 16-01.50.

“I just did long jump this year and I only practiced it twice, so I didn’t really develop my skills that much, so I’m not consistently jumping that well,” Hannah DeVore said.

After starting the year injured, she said she is at 100 percent and she wears KT tape as a preventative measure.

“It started out kind rough because I was injured and stuff but I’ve PRed pretty good in some of my events and I’m having a lot of fun so I think it’s going pretty well,” Hannah DeVore said about this season.

“Meg ran her best in the 800, that was a really good time for her,” Yancey DeVore said. “So that put her in a good spot as well for state.”

Led by senior Ryan Alexander in third, Mingus Union had five runners finish in the top nine in the 800 meters.

The boys 4x400 relay of Cain, Jung, Jon Ulibarri and Alexander had a season best.

While the wind was a concern at last chance meets the day before, it wasn’t much of a factor at Alhambra.

“It wasn’t that bad,” Yancey DeVore said. “There were a few gusts and that impacted some of the meet but it wasn’t like that the whole meet. So it was a decent meet as far as the weather and the wind was concerned.”