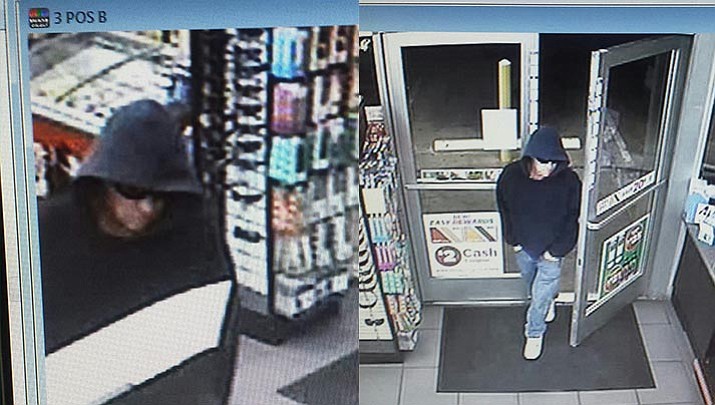 VILLAGE OF OAK CREEK – The suspect who robbed the Circle K store in the Village of Oak Creek around 5 a.m. April 22 has not been identified and is still being sought, according to Yavapai County Sheriff’s Office.

Security photos showing the suspect inside the store, located in the - 6000 block of Highway 179 - have just been released.

The clerk told deputies a male came into the store and walked directly to the counter, stated a YCSO news release.

“He was described as a white male approximately 6’0 in height, weighing approximately 170 pounds and wearing a blue long sleeve hoodie, faded (stonewashed) blue jeans, sunglasses, and white tennis shoes that looked almost new. The suspect had the hood of his hoodie pulled up, so there was no hair color or facial description available. The clerk said the suspect appeared right handed,” said YCSO Media Relations Coordinator Dwight D’Evelyn in the release.

YCSO said the suspect told the clerk to give him money from the register or he was going to shoot.

The suspect had his hands in his pockets and was moving them in such a motion that made the clerk believe he was trying to show he had a gun or make the clerk think he had a gun, stated the release.

No gun was seen by the clerk.

The clerk complied with the demand and gave the suspect an undisclosed amount of cash from the register, said D’Evelyn.

Deputies searched the area but were unable to locate the suspect. Businesses in the vicinity were also provided suspect description details, according to the release.

A hand drawing by the store employee was submitted to authorities.

Deputies are working leads but still seeking any information from the public, stated the release.

If anyone has information regarding the suspect, please contact Detective Todd Swaim at 928-554-8605 or Yavapai Silent Witness at 1800-932-3232. Callers to Silent Witness who provide a tip that leads to the arrest of this suspect, become eligible for a $1000 reward. You must call Silent Witness if interested in a reward.