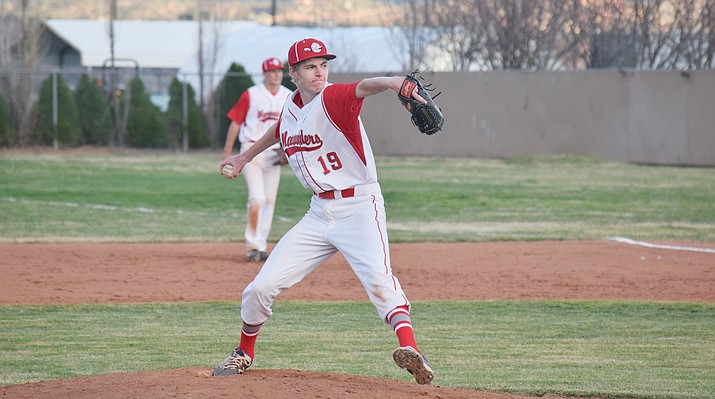 Phoenix Thunderbird in the first round of the 4A state playoffs on Tuesday night. Mingus Union head

“It was a good game,” said Mingus Union head coach Bob Young. “I mean 2-1, you don’t see a lot of high school games that are that low scoring but it had real good pitching, good defense and was very hard fought, went down to the wire and unfortunately we wound up on the wrong end of it.”

After sophomore infielder/pitcher Chris Mathe hit a double in the seventh, junior pitcher/outfielder Jose Pacheco drove him in. Mingus Union had a chance to tie it up or take the lead in the last inning but stranded a pair of runners.

Pacheco relieved him and kept the Chiefs within striking distance.

Thunderbird moved on the face No. 1 Nogales in the quarterfinals down by the border.

Mingus Union lost two in a row to end the season and five of their last seven.

Their late season swoon dropped them out of the top eight in the state and forced them onto the road in the first round.

Young said he didn’t know if getting to play at home in the first round would mean the Marauders would be heading to the elite eight.

“I’m sure it would have helped us having the home field advantage and all but I don’t know if we’d score any more runs,” Young said. “It is what it is, we play a lot of games in Phoenix so we’re used to that and didn’t get it done.”

With Mingus Union softball having lost 12-0 in their opening round game, the Marauders baseball and softball teams suffered both types of playoff heartbreak.

“I’ve lost both ways and it’s painful all the way around,” Young said. “When you get beat so bad, you’re sitting there half the game, not real happy about it. It’s never easy, I don’t care if it’s by one run or by 10, especially in the state tournament when you know it’s it, when you lose the season’s over.”

Although the Marauders end the season with losses, they won the Grand Canyon Region, posting an 8-4 record and winning the tiebreaker by virtue of their 11-5 4A record.

“We started out really strong and we kinda hit a lull there towards the end of the season unfortunately,” Young said. “That’s when we need to be playing our best and we didn’t finish as strong as we need to. I think if we continued to get better, we’d have been a tough out in the state tournament but just didn’t work out.”

Young thinks the Marauders can do well next year if they work hard in the off season.

“We don’t have to replace a whole lot of guys,” Young said.

“It just depends on how hard they work. Everybody in our region was young, so the region’s gonna be really strong next year and they’re going to have to work really hard in the weight room. We gotta get more athletic in the weight room and do all those good things to continue to get better.”