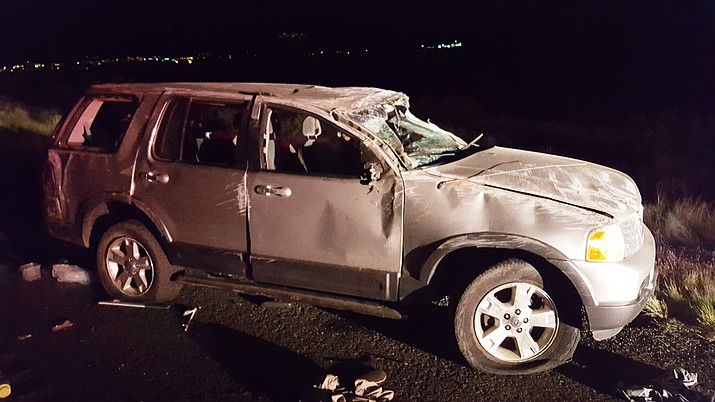 One person was injured in this accident on SR89A. Photo Courtesy of VVFD)

COTTONWOOD – The Verde Valley Fire District responded to a single vehicle rollover Thursday around 12:30 a.m. on SR 89A at milepost 359.

Upon arrival crews found one vehicle on its wheel with heavy damage, according a news release from VVFD.

“There was one occupant who was transport by ground to VVMC with non-life threatening injuries,” said Fire Chief Nazih Hazime in the release.

Assisting with the incident was Cottonwood Police Department and the Arizona Department of Public Safety. SR 89A was closed for a short period of time due to the debris from the vehicle and for a police investigation, said Hazime.

Rollover injures two on SR 89A
Three extricated after SR 89A, Page Springs Road crash
SR 89A reopens after vehicle versus pedestrian accident
No injuries in Cornville RV fire
Two-vehicle crash on 89A between Cottonwood and Sedona
Event Calendar