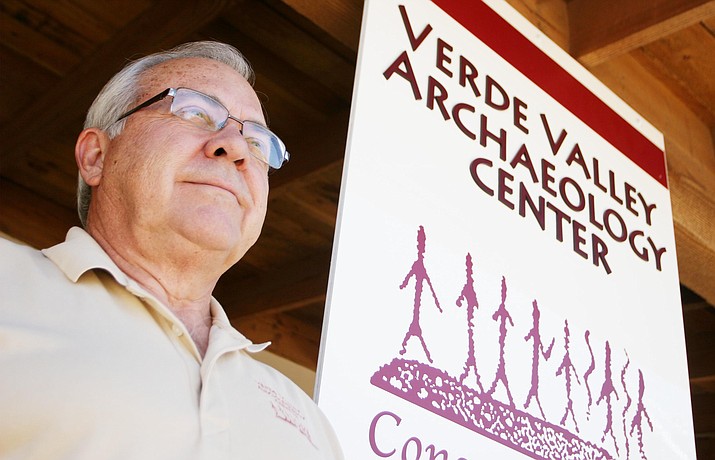 CAMP VERDE – Her first connection with Ken Zoll was in an archaeology class through Osher Lifelong Learning Institute.

That’s when Ruth Kiessel of Cottonwood began to learn about the Verde Valley Archaeology Center.

Becoming fascinated by the area’s pre-history, Kiessel then became a member because a hike that Zoll would lead was only for VVAC members.

That was three years ago. Now a docent, Kiessel says she’s quite happy that she signed up for that class.

So happy, that she nominated Zoll for a Verde Champions award.

Says Kiessel, the Verde Valley has become a “source of archaeological interest” because of Zoll.

“His discoveries and books about V-bar-V have caught the attention of archaeologists,” Kiessel states in her nomination form. “His role in founding the archaeology center has resulted in artifacts staying local and bringing visitors to it from around the world, making it a pride of Verde Valley.”

What does being named a Verde Champion mean to Zoll? More work. There’s always more to accomplish at the Verde Valley Archaeology Center.

Trying to raise $15 million to build a new center off Finnie Flat and SR 260 is on the program’s short list of priorities.

But there’s plenty to do between now and opening a new facility.

On tap for this year, developing a series of monthly free talks beginning in September on a “variety of archaeological, geological and paleontological subjects concerning the Verde Valley,” Zoll said, “which will run through a new program called Verde Valley Archaeology Institute.”

In addition to lectures, VVAC is also developing a series of field seminars which will be guided visits to monuments and other archaeological sites managed by the center.

Today, the center is more than 1,000 members strong.

Does Zoll ever take a break?

According to Susan King, the center’s office manager, no he doesn’t.

“All his hard work and dedication, he’s just go, go, go,” King says. “He’s determined to reach his goals of bringing education, preservation and conservation to the Verde Valley in a meaningful way. What we have here, people should be proud of it. And it needs to be preserved, taken care of.”