Former teachers lash out at lawmakers over school funding 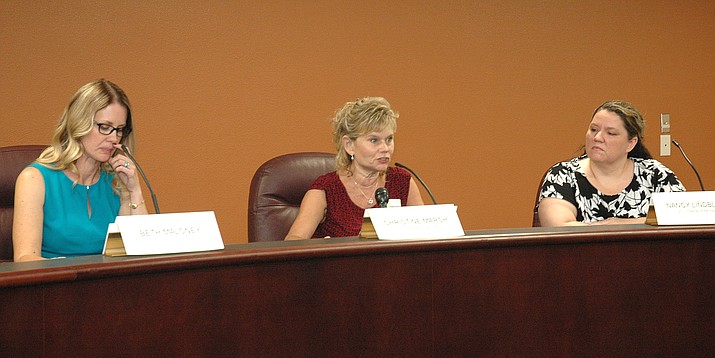 PHOENIX – Three former teachers of the year lashed out Monday at lawmakers for failing to properly fund schools -- and salaries -- but were more forgiving of local school boards who actually set their pay.

State lawmakers agreed in the just-completed session to set aside $34 million for a 1 percent hike, with a promise of an additional 1 percent in the 2018-2019 school year. Questions remain, however, whether those additional dollars will be built into the base of state aid or could disappear.

But that amount is dwarfed by the additional more than $300 million schools statewide will be getting from the voter approved Proposition 123 which settled a long-running lawsuit. And just the change in the state aid formula due to inflation and student growth will add another nearly $128 million.

Beth Maloney, selected the 2014 teacher of the year by the Arizona Educational Foundation, acknowledged the dollars. But she said that ignores where the dollars are needed.

"I know the (local) school board is looking out for teachers,'' she said at a forum Monday that was attended by a handful of parents and three Democratic lawmakers.

"But the pie just keeps on shrinking,'' said Maloney who teaches at Sunset Elementary School in the Dysart Unified School District.

There's also the fact that the Proposition 123 dollars are actually designed to partly compensate schools for the inflation aid they did not get for years despite a voter-approved mandate. The ballot measure settled the lawsuit for a fraction of what was owed.

That, however, still leaves those inflation and student growth dollars.

During the legislative session House Speaker J.D. Mesnard proposed to require that schools use half of those dollars for teacher pay. He argued it is wrong to blame the whole problem of low teacher salaries -- Arizona is near the bottom of all states -- strictly on the legislature.

Mesnard withdrew the proposal without demanding a vote. But he said he may resurrect the idea next session.

Maloney, however, said it comes down to decisions by school boards to give the available money to direct student needs, like building maintenance, school buses, textbooks and even art supplies.

Christine Marsh, the 2016 teacher of the year, conceded that there may be additional dollars available that school boards could divert to teacher salaries.

"Is there waste in schools districts? I don't know,'' she said. "Could they funnel the little bit of money that they get into different areas? Maybe.''

But Marsh, who teaches at Chapparal High School in the Scottsdale Unified School District, said she compares the funding of public schools in Arizona to a family living at the poverty level.

"If they're spending $6 a month on a pack of cigarettes, is that a problem?'' she asked.

"Yeah, that's a problem,'' Marsh continued. "But moving that $6 a month back into the (family's) pot of money, it's still not enough.''

Monday's forum had decidedly political overtones, and not just because the teachers are the same ones who earlier this year said that Gov. Doug Ducey had "betrayed'' teachers who supported Proposition 123 by signing legislation to expand who can get state-funded vouchers to send their children to private and parochial schools.

Potentially more significant, Schapira is running as a Democrat for state school superintendent.

Not all the comments about the just-completed legislative session were negative.

Maloney cited changes in the teacher evaluation process as "a huge bright spot.''

Nancy Lindblom, the 2013 teacher of the year, said until now she got "graded'' based on how students throughout her school did on standardized tests. But Lindblom, who teaches history and government at Skyline High School in Mesa, said many of her students are seniors who do not take the test; others who do are also taking math tests over which she has no control.

Maloney also was particularly pleased with the Arizona Teachers Academy, a program approved by the legislature where students can get a free year of college for every year they teach in public schools. She said new teachers who don't have college debt tend to stay in the profession longer, at least in part because they don't have to take a second job to pay it off.