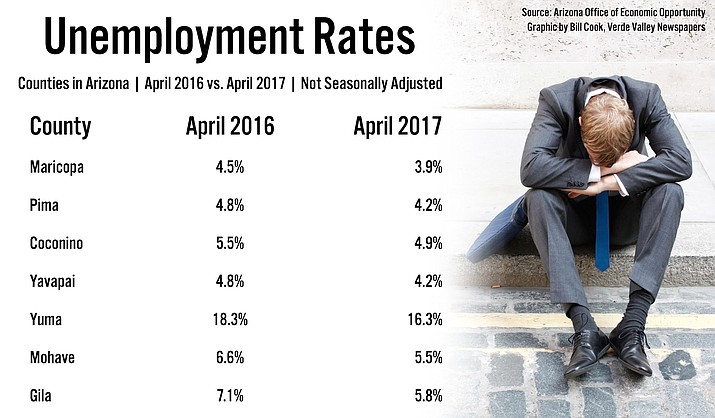 That compares with a typical month-over-month growth of 8,200 for this time of year since the end of the recession. On an annual basis, the number of people working for private companies in April was up by 50,700.

There were significant gains, on a percentage basis, in the construction industry which now is up 5.7 percent over the same time a year earlier. That brings current construction employment up to 139,000.

But Doug Walls, research administrator for the state’s Office of Economic Opportunity, said it would be foolish to assume that the number of jobs in that sector will ever get back to where they were in June 2006 when they peaked at 244,300.

“Just before the recession we did see very, very large increases in a very short period of time which I would say didn’t necessarily represent a sustainable level of growth for construction at that time,’’ he said.

That was when developers were building homes at a breakneck pace, figuring that there would always be more people coming to Arizona and, by extension, the need for more houses. Then the housing bubble burst as people found themselves in homes they could not afford and defaulted, leaving a glut of buildings on the market.

“What we’re seeing in construction, post-recession, is steady and moderate growth,’’ Walls said.

Another bright spot remains the state’s leisure and hospitality industry which added 2,200 jobs in April, with 1,400 of them in entertainment and recreation.

“We saw gains in water parks and golf resorts around the state,’’ Walls said. “Summer is upon us.’’

Manufacturing employment remains weak, adding only 200 jobs last month and 2,200 in the past year.

Walls noted, though, this is not an Arizona phenomenon. In fact, he noted, Arizona’s manufacturing jobs grew 1.4 percent year over year, versus 0.3 percent nationally.

Not surprisingly, the bulk of the new private sector employment was in the Phoenix metro area which includes Maricopa and Pinal counties.

By contrast, Pima County added no jobs at all in April, with employment up year-over-year an anemic 1,200. Walls said a lot of that could be traced, both directly and indirectly, to the lack of new construction in the area, with jobs in that sector up by just 200 in the past year.

Walls said, though, this has a ripple effect on other sectors of the economy which depend on not only the money generated by construction but also on the underlying issue of population growth. New population figures and growth rates for the county will not be available until later this year.