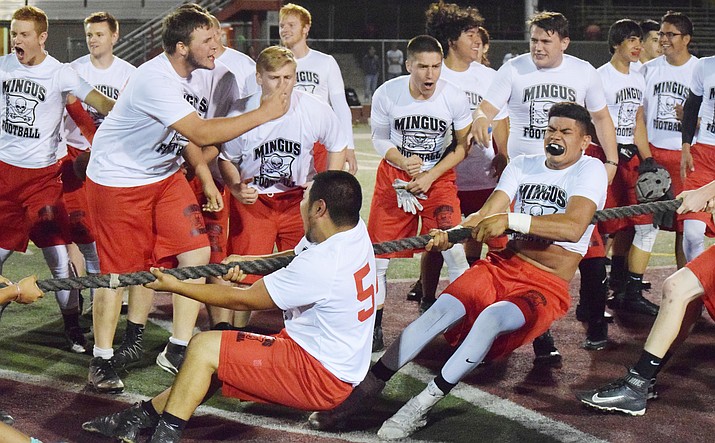 Current Mingus Union football players battle the alumni team in tug of war after the Marauders’ spring football game. The 2017 Mingus Union team faced off against a team of Marauder alumni and seniors from the 2016 squad. (VVN/James Kelley)

Mingus Union football had success, struggles and welcomed some new faces at its spring game on Friday night.

The 2017 edition of the Marauders took on an alumni team, beating the alums in 7 on 7 but seeing their linemen lose the Big Men competitions.

“It was fun, it was nice a lot of the older guys here, that I haven’t seen in a long time and I thought we really competed and I was really pleased with the skill guys,” said Mingus Union head coach Bob Young. “I really thought our skill guys did a good job.”

Mingus Union senior to be Martin Soria runs towards the end zone during the Marauders’ spring football game. The 2017 Mingus Union team faced off against a team of Marauder alumni, winning the 7 on 7 game 34-20. (VVN/James Kelley)

The latest Marauders beat the alumni 34-20 in a 7 on 7 game and between each quarter the sides faced off in Big Man competitions, hauling large tires, running an obstacle course and finishing with tug of war competitions. During the 7 on 7 game, the linemen cheered on the skill players from the sidelines and during the Big Men challenges, the backs and receivers returned the favor.

Zabala led the 2017 Marauder offense up the field, often connecting with fellow newcomer senior to be Martin Soria, a transfer from Williams. 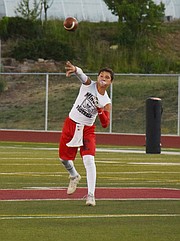 “I thought we did a really good job offensively we scored every time and that’s all you could ask,” Young said. “Our quarterback Antoine Zabala made really good decisions so, I’m looking forward as we start our 7 on 7 here in a couple weeks, they looked good.”

Last year Zabala played in three Mingus Union blow-outs but Friday night was his turn to take over.

“My first experience starting under the Friday night lights, it’s amazing and I couldn’t wait for it,” Zabala said. “I was a little nervous but as a team I think we did amazing and it was an awesome experience.”

The lowlight for the current Marauders was losing the Big Man completion 4-0.

“We got to get better, they struggled with their confidence more than anything else I think because we’re so young,” Young said. “So it’s going to take us all summer to get our confidence.”

The 2017 Marauders wore white shirts and red shorts and the alumni team wore black shirts but stood on the visitor’s sideline. The alumni team was made up of Mingus Union graduates and seniors on the 2016 team.

The past and present Marauders exchanged trash talk and sometimes the game even got heated but after the game they came together and the alumni gave pep talks to the high school kids.

“They’re good (laughs), a little out of shape but they compete and they get after it and they have fun, it’s just fun,” Young said about the alumni team.

During one play when the alumni fumbled the ball and the players scrambled to get it and formed a pile up, battling for the ball one player yelled “it’s Mingus’!”

“The alumni showing up was awesome,” Zabala said. “I think it shows a lot of respect towards the program, the coaches and us for them to play us. It was amazing to have them, it was a great experience and thank you to those guys.”

Young served as referee and didn’t mind complaints from players being ruled down at the one-yard line.

“If I’m the referee I guarantee either way they’re not going to agree but they learn to live with it,” said.

Young it’s hard to say because it’s early but so far junior to be Alex Nelson, Soria, Zabala, junior to be Kendrew Streck and senior to be Justin Link have impressed so far.

“Those guys have really stood out,” Young said.

The Marauders will take time off for finals and Memorial Day before starting summer practice on May 31 and then 7 on 7 action on June 1 at Tolleson.

Mingus Union will host 7 on 7 games and Big Man competitions on June 7, 14 and 28. Their first official practice is July 31, they have a scrimmage on August 16 and open the season on August 25 at Gilbert Higley.

.Junior to be Sharaden Stephens jumps over a hurdle. (VVN/James Kelley)

“The coaches are helping us out, the players are listening, no problems came up and I don’t think any will this season, we are one team,” Zabala said.