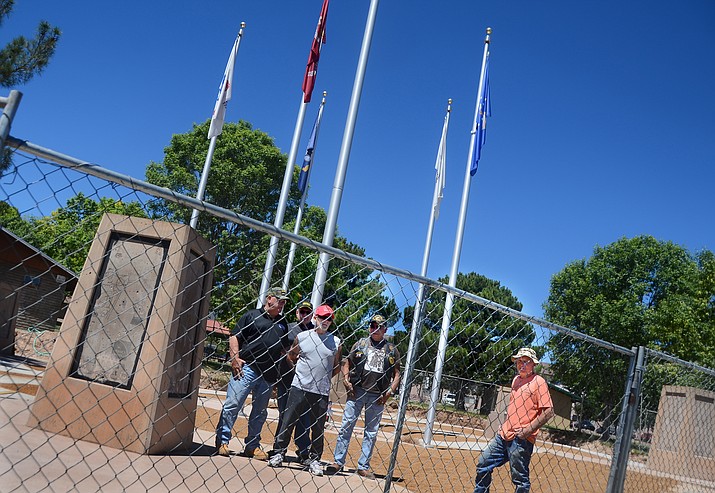 COTTONWOOD – Ron Luce - Vice President of the Verde Valley Military Service Park Committee - said he is hoping for a good turnout, and better weather, for the Memorial Day Weekend event.

“Since the raising of the United States Flag and the five Service Flags on Veterans Day, the construction has accelerated,” the Committee said in a news release.

Completed since the flag raising event in November is the casting of the five service monuments - and pouring of the concrete pads on which they sit. The acquisition of the black granite – for inscribing the veterans’ names - is in the process.

May 27 at 1 p.m., the Park will unveil the completed U. S. Army service monument, inscribed with 83 names of local Army veterans.

A limited number of seats (about 75) will be available, but attendees are welcome to bring their own chairs. The site is wheelchair accessible, and water will be provided at no cost.

“At this unveiling, we will also be replacing the American Flag and five service flags,” said the Committee.

Luce said about 200 people attended the Park’s Veterans Day ceremony, and he expects the same numbers at this one.

A silent bid to buy used flags will be announced at the event for fundraising. Luce admitted that he will probably bid.

To aid in raising funds for the continuing work, these flags will be sold through mail-in bids, addressed to Flag Auction, 150 S. 6th Street, Cottonwood, AZ 86326.

“Please designate a flag on which you are bidding,” said the Committee.

Deadline for receipt of bids is June 20. Flags will include a certificate attesting to the period it was flown over the Verde Valley Military Service Park.

Sponsorships are still being sought for 5-year flag replacement at $1,000 for USMC, USAF, and USCG flags; and $5,000 for U.S. Flag 5-year replacement - all replaced twice yearly, on Memorial Day and Veterans Day.

Luce said some the completion of some of the Park’s projects is taking longer than expected due to the amount of rain the past few months. The other four monuments are expected to be completed by the Fourth of July. The Military Service Dog monument is scheduled to be unveiled in Late June.

In the future, the Park will be adding Dedication Monuments. In consideration presently are “Rosie the Riveter,” “Code Talkers,” and “Korean War.”

“The intent is to have these pods funded mostly by outside entities, although the committee will be involved with approval of the content, as well as, coordination of funding and construction,” said the Committee.

There will also be a dedication for the USO.

Luce said there will be a Reflection Area, with POW, MIA, and Arizona flags. An entrance wall with the name of the Park is also in the works, along with a concrete walkway.

After Memorial Day weekend, the next major flag raising ceremony will take place on Veterans Day.

• What: The unveiling of the U.S. Army service monument

• When: Saturday, May 27. The Calvary enters at 11:30, followed by a flag folding ceremony. All service flags will be changed out. The unveiling will be at 1 p.m., and is expected to last about 30 minutes. Attendees are free to walk around.

• Where: The Military Service Park, located at Garrison Park in Cottonwood