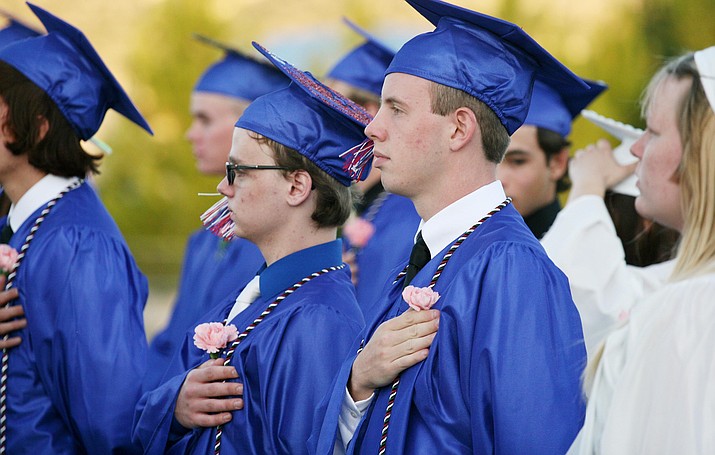 This year, the Cowboys could see about 90 of their seniors receive their diplomas on Thursday at the Sam Hammerstrom Football Field.

And that doesn’t include four students from the school’s accommodation program.

A year ago, then-principal Bob Weir projected that this year would be the first of four in a row with about 100 graduates. With 94, that’s pretty close, and a sizeable increase from a year ago.

Camp Verde school counselor Jane Mathews says “it goes in waves,” the natural up and down of graduates from year to year.

Also include the seven South Verde grads on Tuesday, and Camp Verde Unified School District will this year celebrate about 100 graduates.

On May 18, Camp Verde High School held its annual scholarship and awards ceremony.

A year ago, Camp Verde High School celebrated 11 graduating students who received a collective $587,918 in scholarships and awards.

This year, 24 graduating seniors pulled down $634,136, with another student reporting to Mathews on Monday that he also received an $8,000 scholarship, which brings this year’s award total to $642,136.

Both academically and athletically inclined, Wyatt Howe earned $69,000 in scholarships, the largest award of any Camp Verde Class of 2017 graduate.

Howe, who will play baseball at Bethany College in Lindsborg, Kansas, plans to study finance and wants to become a stock broker.

Senior Rylee Smith, with a 4.024 grade-point average, earned $68,000 in scholarships and will attend Northern Arizona University where she plans to study education so she can become a teacher.

Camp Verde High School does not recognize the title of valedictorian, nor salutatorian, though it will recognize both Samuel Maynard, who finished first in his class with a 4.047 GPA, and Rylee Smith, who will graduate second in her class.

Maynard plans to attend Massachusetts Institute of Technology and will be involved with ROTC as well as study computer science.

Camp Verde High School’s graduation begins at 7 p.m. Thursday on the Sam Hammerstrom football field. Entrance is off Apache Trail. Parking is limited, so arrive early for the best spot.

Graduation practice will be held at 8 a.m. Wednesday, also on the football field.

The middle school will promote 111 students from eighth grade to high school, including Valedictorian Audrey Norman and Salutatorian Chelsey Battise.

Including the school’s accommodation program students, Camp Verde Middle School will have 119 total promotions this year.