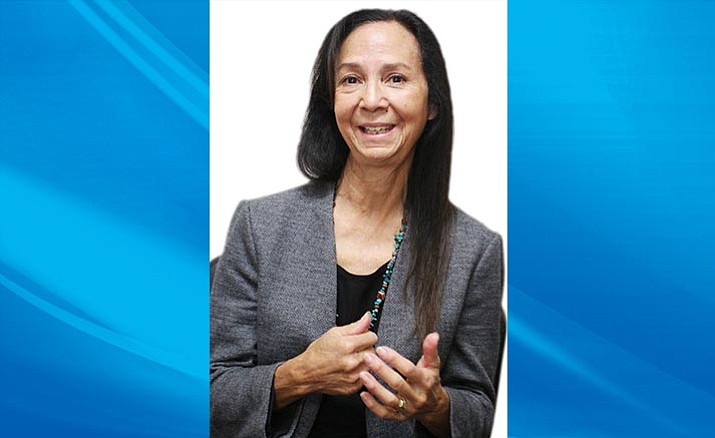 Yavapai-Apache Nation Chairwoman Jane Russell-Winiecki has been announced as a recipient of the Arizona Business Magazine 2017 Most Influential Women in Arizona Business.

CAMP VERDE – Yavapai-Apache Nation Chairwoman Jane Russell-Winiecki has been announced as a recipient of the Arizona Business Magazine 2017 Most Influential Women in Arizona Business.

The honor was announced by the publication and will appear in the July special issue of Arizona Business Magazine. Each year the publication calls for submissions and nominations for women of influence in Arizona. During the nomination process, Winiecki was nominated and selected for the honor, according to a news release the Nation.

“This honor is not about me and my success only. This honor is about my community and people of the Yavapai-Apache Nation. Together, as a people, we are honored for our leadership and community vision. This honor touches my heart and I know that it wouldn’t be possible without all of the strong women who serve on our Tribal Council, work in our tribal government, and the strong Yavapai-Apache women in our community,” said Chairwoman Winiecki.

“Most people leave college and get a job so they can get some experience. I had no interest in finding a job. I wanted to start something that I could call my own. So I put in a lot of hours and developed an elder care company and built the business from the ground up. This was a good start for future ventures,” stated Winiecki.

Twenty years ago, Winiecki recognized the trend of the Internet, at which time she and her husband developed Wild Apache Internet Services in the Verde Valley. Wild Apache provided residential and commercial Internet services to residents and grew from a small start-up to a successful, thriving company, the release stated. In 2008, Winiecki sold Wild Apache Internet to a larger Internet provider in Arizona.

“I don’t count much on luck. I think it’s a lot about hard work and timing. When we launched Wild Apache, timing was everything. The internet was just emerging, there was a need, my husband and I had the knowledge and experience. We were groundbreaking in the industry. We had the privilege of providing all of the technology for the Tribe, and developing websites, servers and networks for local businesses and providing internet to households throughout the Verde Valley,” she said.

Instead of entering retirement, Winiecki started a Healing Center and conducting extensive research on Health and Wellness. In 2008, Winiecki founded Life Vessel Arizona, originally based in the Verde Valley and eventually relocated to Scottsdale. Life Vessel Arizona provides healing and balance services to people who come from all over the world, according to the release.

Chairwoman Winiecki’s personal perspective as a Yavapai-Apache woman, is that Native American people in general have a very close connection to the Earth.

“Everything on Mother Earth is living. That is something Native people have known and been stewards of protecting since time immemorial. I think this connection has been passed down generation to generation, and this connection has made us as people survivors who can endure anything and leaders who look at leadership from the perspective of what’s best for the people and environment rather than the what’s best for myself perspective,” added Winiecki.

In 2016, Winiecki made a decision to seek elected office as the Chairperson of the Yavapai-Apache Nation. Winiecki approached her pursuit of leadership as a collective effort focused on the community and community involvement on ideas, vision and the direction of the Nation, the release stated. In October 2016, Winiecki took the oath of office as Chairwoman of the Nation, and is the first woman in more than 40 years to be elected to the Nation’s highest office and only the second woman in the Nation’s history of modern government.

Through her work as Chairwoman, Winiecki also serves as the Treasurer of the Arizonans for Government Gaming and is a member of the Inter-Tribal Council of Arizona, Inter-Tribal Association of Arizona, Arizona Indian Gaming, and serves as the delegate for the Western Caucus with the National Indian Gaming Association and active in local and regional government activities.

As Chairwoman, Winiecki’s work is focused on the discussion of settlement of the Nation’s federal water rights, completion of economic development and housing projects initiated by the previous Tribal Council and the planning and vision growing of the Nation’s future on housing, healthcare and tribal economy, according to the release.

“Serving as Chairwoman is a huge honor for me. My father served many years Chairman. I see my role as Chairwoman as the facilitator of the tribal government. It is my job to bring our employees and departments together with Tribal Leaders and our people to make sure that every single decision we make reflects the needs of the people. It has been a challenging job, but I am always up for a challenge and I want to make sure that our Nation continues moving forward,” said Chairwoman Winiecki.