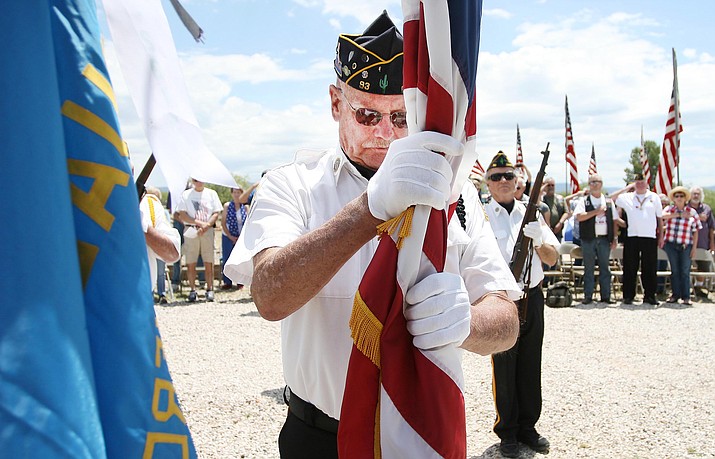 CAMP VERDE – It used to be that Memorial Day was held each year on May 30.

Poppies ‘to anybody and everybody’

CAMP VERDE – It’s been nearly 100 years since remembrance poppies have been given out to commemorate servicemen and servicewomen who died in war.

Since 1977, American Legion Post 93 Camp Verde has had its own Ladies Auxiliary, a group which its first year in existence gave out the red poppies made by volunteers.

This Friday and Saturday in Camp Verde, Legion Post 93 Auxiliary members will again give out red poppies “to anybody and everybody,” says Carol Barnard, the ladies group’s vice president.

Barnard, who has been a member of the Ladies Auxiliary for 18 years, estimates about one dozen volunteers will distribute the red poppies outside the following locations: Ernie’s Smoke Shop, Ace Hardware, National Bank of Arizona, Chase Bank, and between Bashas’ and CVS.

Besides giving out the hand-made floral remembrances, the Ladies Auxiliary will also “wish people to be safe for the weekend,” says Barnard, who also serves as Legion Post 93 cook.

Maybe it seems that not so many people remember that little fact. Truth is, a great many people who take the time to remember loved ones lost at war happen to have been around before Memorial Day was first designated the last Monday in May.

A member of the Ladies Auxiliary of American Legion Post 93, longtime Camp Verdean Jackie Baker will be one of the speakers at the Legion’s annual Memorial Day service, Monday at 11 a.m. at the Clear Creek Cemetery.

Baker, who is also on the Camp Verde Town Council, says she plans to share a few lesser-known facts about the National remembrance set aside each year to remember all who died while serving in the U.S. armed forces.

“Though it’s an interesting coincidence, it’s an urban legend,” Baker says. “The 21-gun salute started well before America was founded.”

Camp Verde’s annual Memorial Day remembrance will begin with a welcome by Legion Post Commander Stewart Phelan, followed by the posting of the colors by the Legion Color Guards.

“Whoever needs a color guard, we’re available,” says American Legion’s Tom Dimock, a member for 23 years, the past 22 with the Legion’s color guard.

“We do honor guard, color guard, we do funerals, flag raising ceremonies, schools. They’re part of my family. We try to help the community – and the veterans.”

Karen Mealey and Sharon Doran will sign the National Anthem, followed by an opening prayer by Legion Post Chaplain Gordon Kelsey, the pledge of allegiance and the placing of the wreath, by the American Legion Ladies Auxiliary.

To finish the remembrance, the Legion Post’s Honor Guard will do the 21-gun salute, followed by taps, the retrieval of the colors, then closing remarks.