Mingus Union sophomore captain Maddie Bejarano was named first team all-conference and the Grand Canyon Region offensive player of the year. She batted .626, had an on base percentage of .685, 39 RBIs and 49 runs this season. She now owns eight of the 12 Mingus softball records. (VVN/James Kelley)

While Mingus Union softball fell just short of winning the region championship, they state and region received recognition as if they had.

Mingus Union head coach John Brown said he couldn’t remember the last time the Marauders had so many all-region or all-section players.

“They used to have some of that stuff painted on the wall but it was pretty sporadic, you know one or two players here and there but this one had a pretty serious showing,” Brown said, “but I’d say it’s been quite a while.”

“Maddie had a great season, another record breaking season,” Brown said. “She owned six records coming into this season and now she’s got eight. So eight out of 12 is a pretty big number for a sophomore, she’s only got four more to go to try and have every record in Mingus softball. So to say she had a good season especially considering she was injured, I guess that’s an understatement, she had a great season.”

Zielinski batted .525, had an on base percentage of .550, 46 RBIs and 45 runs as Mingus Union a game out of first in the Grand Canyon Region.

Mabery won Mingus female athlete of the year and was co-MVP for the softball team with Bejarano in addition to her region awards.

“Morgan had a great season, it was her best season,” Brown said. “She finally got to play the whole season uninjured, and uninhibited. She was a leader for us, she had the best stats she’s had all four years. So she’s very deserving of all the awards she’s got.”

“She’s going to be a hard player to replace,” he said. 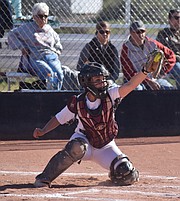 Mingus Union senior catcher Morgan Mabery was named Grand Canyon Region defensive player of the year and was first team all-region. She had a .972 fielding percentage this season. (VVN/James Kelley)

“Honestly if I’m being candid, I think we were the best team in our region,” Brown said. “We kinda gave the region championship away with a couple losses that absolutely shouldn’t have happened but all the teams in the conference, all the coaches noticed these kids and therefore they made the team and they had a pretty good showing in that all region team, so I’m pretty proud of them and I’m glad that the other coaches at least acknowledged that.”