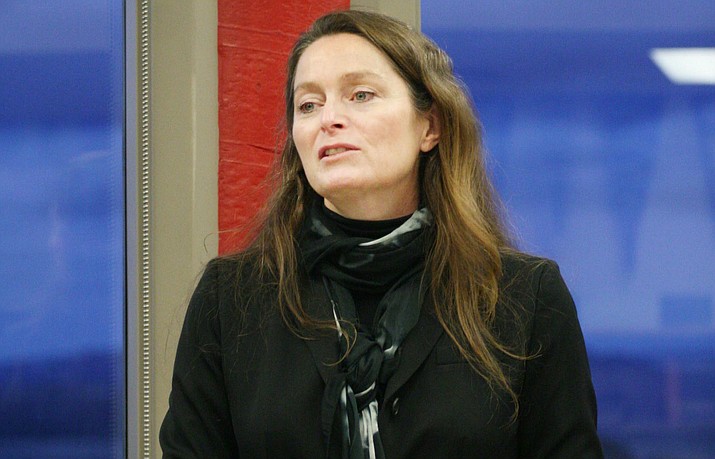 COTTONWOOD – Mingus Union is calling it a “reorganization of the administrative structure of the high school.”

The Mingus Union Class of 2017 graduation begins at 7 p.m. Friday on Bright Field at Mingus Union High School. Graduates are to meet in the school’s gym at 6 p.m. to line up for the ceremony. Both Mingus parking lots are available, but they are expected to fill up by 6 p.m. Overflow parking is available in the Mingus lot across Camino Real from the east lot, at Fry’s and at the Faith Lutheran Church just east of the school.

In English, it means that incoming superintendent Dr. Penny Hargrove will also be the school’s principal for the 2017-2018 school year.

Which means that Jennifer Chilton, longtime principal at Mingus Union, is looking for a new job.

“I understand and respect this financial decision to streamline the administrative structure of our single-school district,” Chilton wrote to interim superintendent Dr. Jack Keegan and the district’s governing board in an “acknowledgement of layoff” letter dated May 10.

“Dr. Keegan has communicated to me that the positions of superintendent and principal will be combined beginning in the 2017-18 school year, ending my employment contract rights,” the letter also stated. “Therefore, I realize that my employment will end on June 30, 2017.”

Tuesday, the Mingus Union board voted 3-0 to have its new superintendent also become its new high school principal.

Board members Anthony Lozano and Robb Williams did not participate in the vote.

In late-April, Dr. Hargrove was in town for a short stay that included a meeting with both Mingus Union board president Anita Glazar and interim superintendent Dr. Jack Keegan.

Wednesday, the incoming superintendent said that at the time of the meeting, Dr. Keegan told her that Chilton would be leaving the school.

“It was kind of apparent by Jack and Anita that this might be the case,” Dr. Hargrove said. “I was told she was resigning, and that this late, this could be a problem [finding a principal].”

Though Dr. Hargrove’s contract does not include serving as principal, she also said Wednesday that “right now, the contract will stay until we decide how to do things.”

“At least to start the school year,” Dr. Hargrove said that she will be both superintendent and principal.

“Once I get there, once I evaluate, I can recommend a reconfiguration that best meets the needs of the school district,” Dr. Hargrove said.

According to the incoming superintendent, Chilton “has resigned.”

According to one of the school board members who chose not to vote Tuesday, “they eliminated her position.”

“She won’t be principal any longer,” said Board Member Anthony Lozano. “She has no job. Why do we eliminate an employee who has been here for 10 years and not [offer her an opportunity] to move into another position? I have no answer.”

According to Dr. Keegan, Chilton’s layoff was a matter of spending less money on the school’s administrative end. And it was first discussed, he said, shortly after he arrived in mid-February.

“Within two, three weeks, they asked me if [the superintendent and principal positions] could be combined,” Dr. Keegan said. “I told them I would study that.”

“(Board member Jim) Ledbetter asked me,” Dr. Keegan said. “One or two others may have said something.”

Attempts to reach Ledbetter, as well as board members Lori Drake and Robb Williams have gone unanswered. Board president Anita Glazar has also not answered any questions pertaining to Chilton’s removal.

Based on the size of the district – one school – Dr. Keegan said he recommended that the two positions could be combined.

“I think it’s very doable,” Dr. Keegan said. “Instead of two heads around, if you have one person in charge, it’s a lot easier. And you reduce administrative costs.”

First he saw of it

Lozano also said that Tuesday’s agenda was “the first time I saw anything of a restructure.”

“My question is why was it restructured?” Lozano asked. “Maybe I do understand. That’s why I don’t agree. Looking at the whole thing, I feel there’s more to this than what is apparent.”

Asked for clarification, Lozano said that it “appears to have been recommended by the interim superintendent.”

“At least after he got here,” Lozano said. “Maybe before. I don’t know.”

Some might say that the timing wasn’t right for both the board and the district to ask Chilton to not return to the school that graduates her valedictorian daughter Phoebe and about 260 other students Friday night.

“At this point in time,” Lozano said that he thinks the “reorganization is unnecessary.”

“It should be the responsibility of the new superintendent coming in, with the cooperation of the board,” Lozano said. “Then we could find out if it’s beneficial to restructure.”

But Dr. Keegan said it’s more typical that in this case, “you bring in an interim superintendent who can make it happen, so the new person can come in with things in place.”

“When Penny comes in, she can arrange assignments to fit the organization the way she sees it,” Dr. Keegan said.