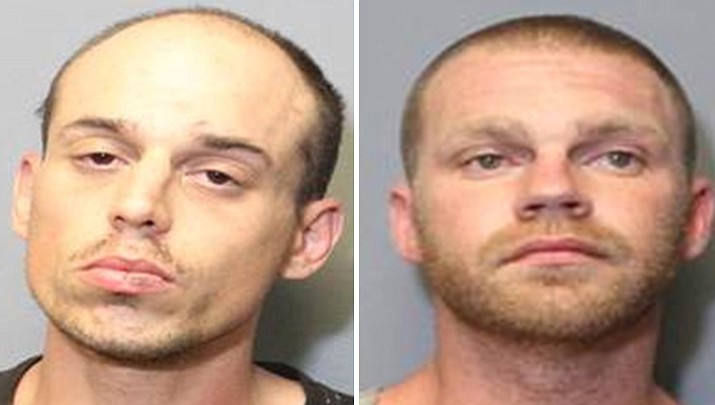 COTTONWOOD – Two Flagstaff men were arrested Thursday for their alleged involvement in Wednesday’s armed robbery at the Cottonwood Chevron Station.

The male suspect accused of robbing the gas station in the 1200 block of SR260 around 10:30 p.m. has been identified as 27-year-old Paul Wilson, according to a news release from the Cottonwood Police Department.

“Wilson entered the Chevron station and robbed it at gunpoint. Approximately $500 was stolen from the store,” said Commander Gary Eisenga in the release.

Wilson was arrested and charged with robbery.

Wilson had fled in a black Toyota pickup truck with another suspect, who has been identified as Daniel Lykins, said police.

Lykins, 32, was the driver of the suspect vehicle involved in the robbery and subsequent pursuit by Yavapai County Sheriff’s Office, according to the release.

According to a previous release, YCSO called out DPS Ranger and additional manpower to assist in the search.

Lykins and his girlfriend were located near the area where the pursuit was terminated, in the area of Schnebly Hill Rd off of I-17, said police.

He was arrested and charged with facilitation of robbery and unlawful flight.

Lykins’ girlfriend has not been charged in this incident.

“Prior to the pursuit which began in the Village of Oak Creek, Wilson had exited the vehicle. A store clerk in VOC contacted YCSO with information as to Wilson’s whereabouts. Wilson was located by YCSO deputies in the VOC area,” said Eisenga.

Both suspects were transported to and are being held in the Yavapai County Jail.

Police said there were no injuries to any persons involved inside the business.

“Cottonwood Police Department would like to thank all agencies involved in assisting us with the successful and safe conclusion of this incident,” stated the release.