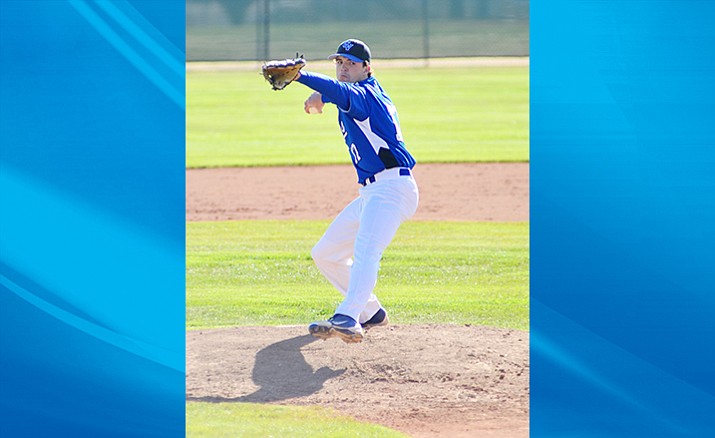 Gavin Collins pitches at Camp Verde while in high school in 2012. After playing at Muscatine Community College and University of Illinois at Springfield, Collins signed with the professional Westside Wooly Mammoths in metro Detroit. (VVN File Photo)

“It’s every kid’s dream honestly,” Collins said. “If you’re not dreaming that high, then why are you really doing it? It’s always been my dream to play at the professional level and to keep on moving up and honestly just try to get the best out of my potential because I know I haven’t peaked yet and there’s a lot more to go.”

Collins was a Cowboy from 2009 to 2012 before going on to Muscatine Community College and then NCAA Division II University of Illinois at Springfield.

He played in a semi professional league in Canada after his senior year of college and then trained for the USPBL tryout.

The day before Camp Verde’s senior night win over Northland Prep, Collins threw off the Cowboys’ mound before going to try out.

“I talked to him the day before he left, threw a bullpen on our mound and he looked good and I thought ‘you know, if he throws that well down there, he’ll definitely get an opportunity,’” said Camp Verde baseball head coach Will Davis.

Since graduating in 2012, Collins improved his control and velocity.

“We always knew that he had talent because he threw so hard but he had control issues (laughs),” said Steve Hicks, Camp Verde’s head baseball coach in 2012. “I think one time, we laugh about this, I believe one game he threw a no hitter against a team and we won 7-4 (laughs). They didn’t get a hit and he walked a few guys obviously.”

In a game against Sedona that the Cowboys needed to win to get in a bye in the playoffs, Collins was also dominant/wild.

“He struck out like 13 in a 7 inning game and walked 16 or vice versa. It was one of the two (laughs),” said Hicks, who is the Director of Business Services for Camp Verde Unified School District. “He could throw hard, he was a tough one to hit but once he got his control down, he was gonna be able to move on.”

Davis said in high school Collins threw in the mid 80s and now in addition to improving his control, he throws in the mid 90s.

Collins thanked his mother, Alethia Collins, his grandmother, Evelyn Ferguson and the rest of his friends and family plus Hicks for helping him get the to pros but he thinks having to move to Iowa and Illinois matured him and helped him improve his stuff.

“I’m still working out little kinks here and there,” Collins said. “It’s a never ending thing, especially being a pitcher. If you asked the teams or coaches that played against us in high school, they’d probably would never guess that I’d be at this level. It’s just a lot of hard work that you’ve got to put into in the offseason and mentally you just gotta get stronger and I think as the years went by I think that’s one of the things that I’ve been able to do.”

The USPBL is a four-team league based in the Detroit area that launched in 2016 but already has seen 13 of its players sign with Major League Baseball organizations. They play in Utica, Mich.

Collins said the town is “great” and about half an hour from downtown Detroit and they get around 3,000 to 5,000 fans a game. He says the level of play is about AA to AAA.

“We have a bunch of guys that were like first round picks that for some reason or another got released,” Collins said.

Collins came back to Camp Verde and helped out the 2017 Cowboys with their eventual 25-4 and region championship season, throwing to 2017 senior and catcher Easton Braden and assistant coach and former teammate Kyle Lobaugh.

“That was awesome,” Davis said.

Collins was impressed with the 2017 Cowboys.

“I like the way they played, they were scrappy and they had a no quit attitude,” Collins said. “That’s one of the big things, especially with baseball. I was impressed. Playing at the college level obviously there’s a step up but some of these guys are going on and going to be doing great things in college I’m sure.”

The Woolly Mammoths are the latest team in the league, which is for 18-25 year olds.

The team is named for the mastodons found in Michigan the last 100 years.

Each team has 25 players and they have 75 games in a season.

Collins is currently third in the league in ERA.

“I’m just lucky and very grateful to still be playing the game,” Collins said. “Coming out of high school I never thought I would have been going to college and playing and experiencing everything that I have. It’s quite the experience.”