Oh man, and I thought the sheep were a ravening horde! They got nothing on piglets. Today the eight of them decimated my new chard on my new hugel. When they were done eating greens, they did a little tilling for me, although not quite where I needed it.

The little guys are almost one month old now and boy, have they developed personality. They chase each other, play tug-of-war with sticks, steal tools, turn circles because they can and wag their tails. I swear, they're the strangest looking litter of puppies I've ever seen. Except I think they're smarter than dogs, at least when it comes to escaping confinement. This includes squeezing through holes I was previously certain they couldn't possibly squeeze through.

Their favorite thing to do is break into the turkey coop because the food those stupid birds get is a whole lot better than anything available to them, including Mama's milk. Well, except for apricots.

A week or so ago, my earliest producing apricot tree was covered with about twelve dozen amazingly huge, bright orange fruit. That's a pretty tame harvest for this tree, but this is its "off" year. On its "on" year, it's covered with so much fruit--although it's never been as large or sweet as this year--that I get sick of apricots before they're gone. I wasn't even close to being sick when this year's harvest disappeared.

Stephanie and her friends. She's moved on to the peaches

That's because my sister Stephanie came to live with me until the foot heels. She's been a huge help, even though she doesn't think she is. Farming isn't the sort of job you just step into. There's so much to remember and things die when you make mistakes. But Steph's a trooper and she's really getting her exercise. It's hard to avoid exercising when you have to drag hoses all around the property. Why dragging a hose? Because I don't let a little detail like nearby irrigation stop me from planting trees. If the soil looks like it can support a tree, I shove a tree into that spot. How I get water to that tree is a matter for later consideration. 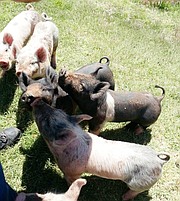 Much to my surprise, Stephanie really took to the piglets. Given Miss PIggy's intimidating size and the fact that Steph hasn't spent much time around livestock, this wasn't quite what I expected. I think her love for the little guys blossomed right after I explained how to feed and water Miss Piggy. I mentioned that Mama pig really loves apricots and that feeding her said fruit would assure Stephanie of MIss Piggy's eternal devotion. Somewhere in there, I think I also mentioned that the piglets weren't really excited about being touched yet.

The next thing I knew Stephanie was hand-feeding those piglets gooey chunks of ripe apricot. Now, every time I enter the orchard I have eight little guys snuffling at my shoes and pants, hoping I might be that one who provides the treats.

Unfortunately, this breakthrough in piglet fear factor has lead to even more giant leaps for pig-kind. Once the piglets, who are really too smart for their own good, decided that humans weren't so bad after all, they added to leaps to their bounds. These include new activities such as "Who cares if Mom follows us? We should all go laze in the pond for a while" and "If we hide under the chicken coop we can jump out at the sheep." By the way, there is a ringleader. It's little black girl #1, MIss Piggy's first born. If there's running involved, she's definitely the leader of the pack.

Their newborn independence is driving poor Miss Piggy out of her mind. She spent a half an hour today trying to find them while they were occupied with chard-eating. She looked in all the usual places--that pond, the chicken coop, the place where they take their dirt baths, the back of the turkey coop which their mother tore apart because the little guys had gotten stuck in it, the far end of the property where they do whatever it is they do back there. She just can't keep up with them. Part of this is because, at five hundred pounds, she's always late getting to the party. That's because she CAN'T wiggle through a gap in the chicken wire or the handy panels that I put on top of the fencing that keeps her contained. Stephanie's new job is to add yet more fencing atop the existing layers of fencing.

Given this new shift in piglet behavior over here, my future is looking a little hectic, especially since I'm still limping, But, as I told myself today, they're only here for six months. Surely, I can keep these guys contained for that long. I mean, it's just six months. Right? RIGHT?? RIGHT???