Life in the Slow Lane: Radishes 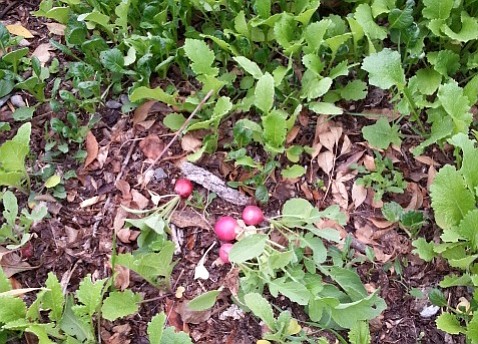 It's a science geek-out day for me. Once again, I'm growing radishes, which I emphatically hate but cannot stop myself from eating. Not sliced in a salad, but the instant I pull them out of the dirt in my garden. It's like an addiction. I yank on the leaves, rub the little red bulb against my jeans, then consume it, grimacing the whole while. I absolutely hate them, but I can't stop myself. I must eat the radishes the instant they come out of the ground.

Today I decided to figure out what could be in a radish that I'm craving. I ended up on a great site nutritiondata.self.com that gave every particular you ever wanted to know about the nutritional breakdown of food.

I guess it's no surprise that radishes are carbs. Of the 18 calories in a cup of sliced radishes, 15 of those calories are carbs. Surprisingly 2 calories are protein and 1 is fat. Fat? Yep, .1 gram of fat, with 36 mg of Omega-3 and 19.7 mg of Omega-6 fatty acids. About half of the carbs are sugar--could have fooled me--split between three sugars: Sucrose (116 mg), Glucose (1218 mg) and Fructose (824 mg). It can't be sugar I want! If I'm going to eat sugar, it'll be in chocolate. (Chocolate-coated radishes? Not happening.)

What about those 2 calories/.8 grams of protein? What a list! Tryptophan, Tyrosine, Cystine, Histidine, Isoleucine, Proline, Threonine, Alanine, Glycine, Serine, Leucine, Lysine, Valine, Phenylalanine, Arginine, Aspartic acid, Glutamic acid. I listed them from the smallest amount present to the highest, and Glutamic acid is outnumbers all the rest in mg at 182 mg, with Aspartic acid at 74 mg. It turns out that both Aspartic and Glutamic acid are neurotransmitters. But Glutamic acid is what our tongue recognizes as the "umami" flavor. More to the point when Glutamic acid is turned into a salt it becomes MSG. Seriously?! Could that be what I'm craving?

Then I checked on the vitamins. Vitamin C dominates the list at 29% of the daily requirement (which is set at a number that's barely enough C to prevent Rickets). Since we and guinea pigs are the only mammals who don't produce our own Vitamin C, then it's certainly possible the Vitamin C is what I'm craving.

But when I looked at the minerals what I found left me pretty certain what it is that drives me to eat these nasty little bulbs. There were trace amounts of Fluoride, Phosphorus, Magnesium, Selenium, Iron, Zinc, Copper, and Manganese (depending on what's actually in the soil, of course), then 29.0 mg of Calcium and 45.2 mg of Sodium. It was the whopping 270 mg of Potassium that caught my eye.

Because what's in the soil determines what's in the bulb, I'm pretty sure it's the Potassium. Three, maybe four, years ago I grew radishes in my mostly-sand-filled raised beds. Although the plants grew well enough, I never once had the urge to instantly consume those radishes. I'm guessing they didn't have the same amount of Potassium in them. Or maybe I just need to eat dirt-coated radishes.

The Fit Life: Get Fat!
Stable glycemic makes you feel energized, satiated, never hungry
The Fit Life: Comfort Sugars, Fats, and Other Beasts
How Is Your Salad?
Be Fit Fit! Addicted to the White Death?
Event Calendar