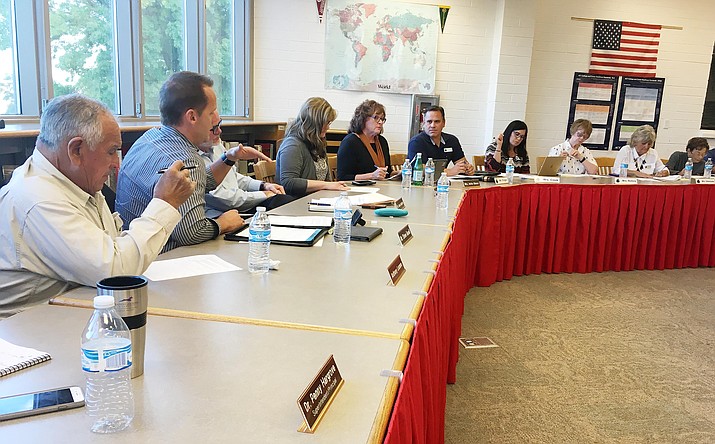 Governing boards from the Mingus Union High School District and Cottonwood-Oak Creek School District met Wednesday regarding the formation of a fact-finding committee to help the two districts decide whether a merger should take place. (Photo by Bill Helm)

COTTONWOOD – By Nov. 8, both Cottonwood-Oak Creek and Mingus Union school boards will select members of a committee to help the school districts decide whether to support district consolidation.

Should the Cottonwood-Oak Creek and Mingus Union school districts merge into one district, would it be a unification of the districts? Or a consolidation?

Both, according to Yavapai County School Superintendent Tim Carter.

A consolidation is what happens when two or more school districts that have the same border or cover the same area merge together, according to Carter.

Wednesday, the two school boards held a joint meeting to discuss the committee’s demographics, as well as its purpose and duration of usefulness.

It’s safe to say that Cottonwood resident Jonathan Jauregui will not be part of the committee, as he told both boards in the public comments section of the meeting that he was – and is still – against a merger of the two districts.

“But I want to thank both of these boards for doing what they’re doing,” said Jauregui, who in 2016 ran unsuccessfully for a spot on the Mingus Union High School District’s governing board.

Since February, Cottonwood resident Andy Groseta has let Mingus Union and Cottonwood-Oak Creek school districts know that they should merge into one district.

“Though we may change our minds later,” Glazar said following the Wednesday meeting.

The committee should include the presidents and vice presidents of each board, as well two staffers from each school district, said both Finger and Glazar.

Additionally, Finger and Glazar agreed Wednesday that each district should submit names of prospective community members that the Cottonwood-Oak Creek and Mingus Union boards would whittle down to three or four by Nov. 8.

On Nov. 7, the Cottonwood-Oak Creek school board will meet for its regularly-scheduled monthly meeting, and will make official which two staffers it will select to be a part of the committee.

What will the committee’s focus be?

Cottonwood-Oak Creek Board member Janice Rollins stated that the committee’s main focus – as well as the focus of the two school boards – “is all about the kids.”

“If by consolidating the districts, can the children be better accommodated” Rollins asked. “Can a better education be accomplished? Can we save money”

As well as seeking out and soliciting fact, the committee’s purpose should be to “add a level of transparency,” according to Mingus Union Board Member Steve Gesell.

“It only makes sense to get more objective minds to focus on this issue,” Gesell said. “It’s a very complex issue.

Both boards decided Wednesday that the committee will first be tasked with four identified topics of inquiry: fiscal, staff, student and community concerns. The boards also decided to tentatively set aside Nov. 14 as the first meeting of the fact-finding committee.