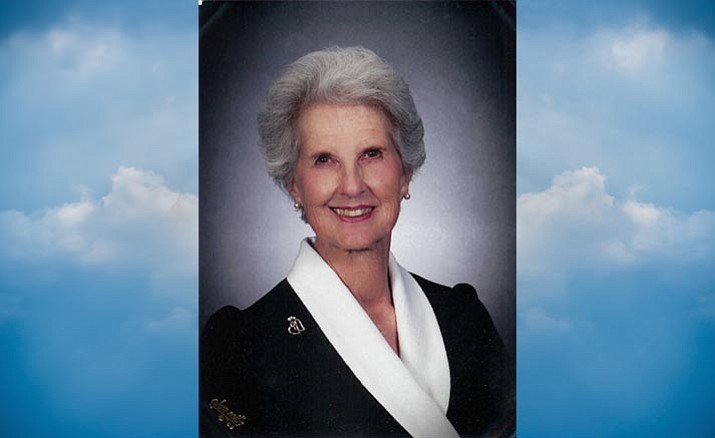 Ellen Singleton (Crick) passed away peacefully in her sleep on October 28, 2017 in Denver, Colorado. Ellen Marie Cooper was born in Winston-‐Salem, North Carolina, on   April 24, 1932. She was the only daughter of Carlos and Edna Cooper, with two brothers, Carlos Jr. and James.

In August 1950 she married Burt N. Singleton, Jr. and three years later graduated from the University of Maryland with a degree in Music Education. Ellen and Burt moved to California and raised their four sons on a ranch in Yucaipa. After Ellen’s sons were grown and married, she and Burt moved to Camp Verde, Arizona. Burt passed away four years later.

In June of 2002, Ellen married Ollie Crick and they moved to Flagstaff, where she served as a Volunteer Chaplain at Flagstaff Medical Center. She and Ollie attended Mountain View Baptist Church. Around 2006 Ollie and Ellen moved to Cottonwood, where they attended Verde Baptist Church (now Verde Community Church). Ellen volunteered at Verde Valley Medical Center as Chaplain. Ollie passed away on August 9, 2012, and Ellen later moved to the Denver, Colorado area to be near her oldest son, Burt III, and his family. She was a resident of Clermont Park Retirement Community until her passing.

Ellen is survived by her older brother, Dr. Carlos T. Cooper, Jr., and her four sons, Burt, James, David and Paul, along with their wives, as well as 14 grandchildren and 5 great-grandchildren.

To those who knew her, Ellen was a devout and faithful follower of Jesus Christ. Her faith compelled her to share the gospel with others, and she felt a particular calling to hospital patients.