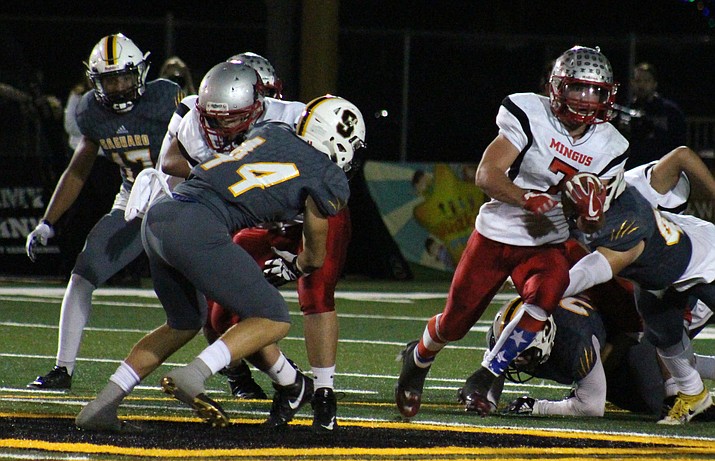 Mingus senior Tyler Kelly won Grand Canyon Region player of the year and first team all-region as a kick off returner and running back. (VVN/James Kelley)

Mingus Union football finished atop the Grand Canyon Region and racked up the most post season honors.

The Marauders had six first team all-region selections, three second team, four were honorable mention and they won coach and player of the year.

“We’re well represented,” said Mingus coach Bob Young. “I mean anytime you get other coaches voting on stuff there’s some guys who you think deserve more than they get but when you got seven teams in the region, there’s only so many spots on the first and second teams, so you get what you get.”

Senior Tyler Kelly won region player of year and was on the first team for kickoff returner and running backs.

“He was the best player in the region,” Young said. “He was a dominant player on all facets of the game, I think when we first started this year we thought he was gonna play a lot more defense than offense and it just kinda evolved that once we put him at fullback, everything started to click. He’s a tough guy to bring down between that and his kick off returns, so he had an exceptional year.”

“That’s just a by product of everything else (laughs),” Young said.

Young said Moreno, who is listed at 5-8 190, really deserved the honor.

“Nobody works harder than that guy,” Young said. “He’s one of the most undersized offensive linemen. He’d probably be the smallest offensive lineman on that first and second team all-region but solidified the middle of our line, he was the most consistent guy we had. Like I said, he just lives in the weight room, so he deserved that. I was excited to see him get first team. The other coaches recognized his worth.”

Young said Soria just missed out because he had to sit out half the regular season after transferring from Williams.

Young also thought Zabala should have been second team despite being new to the starting role.

“The quarterback from Bradshaw had the best year but I really thought Antoine was the second best quarterback and I know the kid from Prescott got it but I thought Antoine had a heck of a year for his first year and I think he’s going to be driven by that slight (laughs),” Young said. “He was in the weight room waiting for me Monday morning ready to get after it.”