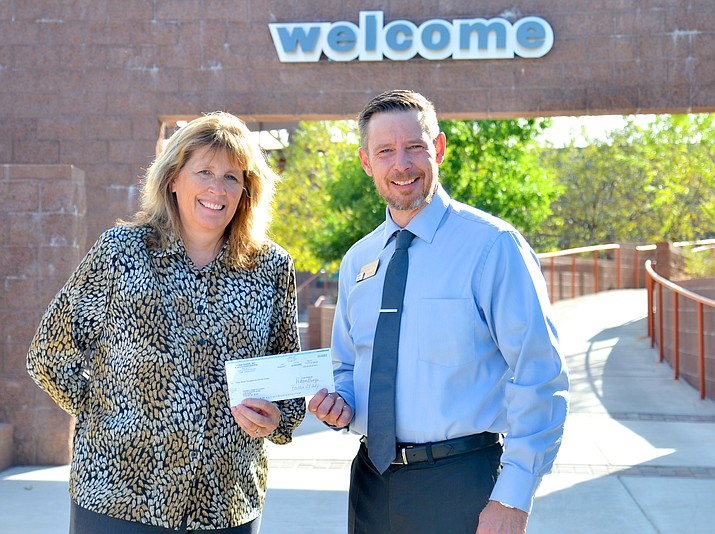 A multi-media company’s family has transformed a long legacy of sharing tennis with their community into a $143,000 gift to Yavapai College.

The contribution from the Yuma Tennis Association via the Soldwedel family – owners of Western News&Info, Inc. (WNI), -- includes cash for immediate use and permanent and perpetual endowment funds that will provide scholarships for YC students of all ages and countywide for decades to come.

The Soldwedel family owns WNI, the parent company of the Daily Courier, the Prescott Valley Tribune, the Chino Valley Review, the Verde Independent and the Camp Verde Bugle, among other media outlets across Arizona.

WNI President and Chief Executive Officer, Joe Soldwedel, is a tennis enthusiast and served as president of the non-profit Yuma Tennis Association from 2003 to 2015.

“It was my dad’s (Joe Soldwedel) vision to establish the YTA. He wanted kids to be able to play tennis for free,” said Kelly Soldwedel, associate vice president of WNI. When the association’s property sold and the non-profit disbanded, the family chose Yavapai College as a beneficiary.

The YTA gift to Yavapai College includes an endowment for the Del E. Webb Family Enrichment Center, an early childhood education center on the YC Prescott campus. Kelly Soldwedel is an involved parent and works with the FEC board of directors and her 2-year-old daughter, Lake Thornhill, has been an FEC student since infancy.

“We’re just really passionate about children, their education and development, she said. “I feel very fortunate my family is able to donate to the FEC, because I know the FEC will put the funds to the best possible use for children.”

FEC Co-Director Vickey La Motte said the Soldwedel’s generous donation will support FEC program elements that make it “high quality” as well as scholarships for low-income families. “We’re thrilled to have this endowment established for the FEC. The Soldwedel family is a wonderful example of how community support can positively impact programs like ours.”

The YTA’s $143,000 contribution to YC also endows scholarships for both the YC Verde Valley and Prescott campuses.

The endowed scholarship funds are unrestricted, meaning they can be awarded to anyone and for any academic or career program. “Those are the most valuable kind of scholarships,” said Paul Kirchgraber, executive director of the Yavapai College foundation.

YC President Dr. Penny Wills expressed gratitude to the Soldwedels for investing in education locally. “To me these checks represent the enduring strength of our programs, our partnership with the community and the future.”

Don Michelman, Yavapai College Foundation board president, also thanked the Soldwedels for contributions that show they care as much about future generations as the foundation does. “That’s what the foundation is for. It’s for the future,” he said.