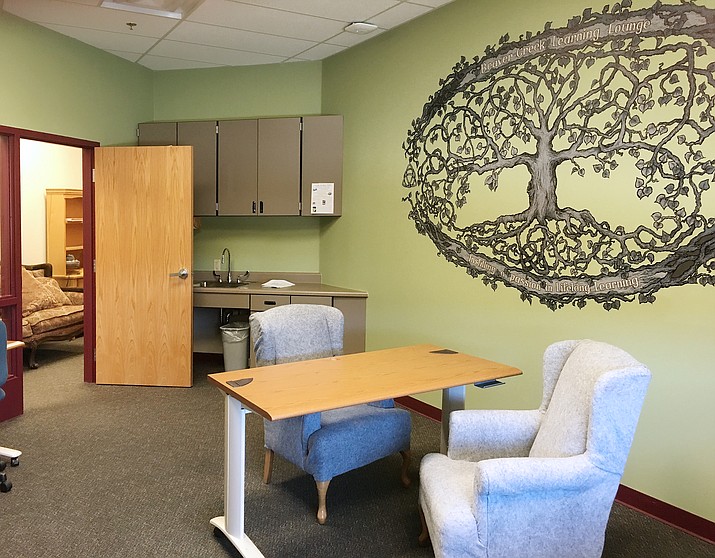 From 5 p.m. until 7 p.m. Monday, Nov. 20, Yavapai College staff will be on site at Beaver Creek School’s new learning lounge, which was formerly a meeting room between the library and the district/school office. College staff will be able to help prospective college students with their financial aid application – FASFA – and their spring semester application. (Photo by Bill Helm)

RIMROCK – Each year, the K-8 Beaver Creek School District pays about $750,000 in tuition to send its previous year’s graduates to either Camp Verde, Mingus Union or Sedona-Red Rock high schools.

That’s not likely to change. Unless Beaver Creek School District were to unify, meaning become a K-12 school.

The Rimrock school is making no plans to expand its program to keep its eight-grade promotees in the area.

Ward made it clear that soliciting information does not mean the district has any plans to unify.

“This is us looking at the fact that some students fall through the cracks,” Ward says. “The board is interested in hearing what Mr. Carter has to say. We want to see what the possibilities are.”

Ward says that when a school district spends “three quarters of a million dollars for high school tuition,” Beaver Creek School District is only doing its due diligence as it looks at “options for the future.”

The future, Ward says, is not tomorrow. At least not literally.

There’s more to making a decision such as expanding one’s school than saving or maximizing money. Though economics do play a role, Ward says. Not just for the district, but also for the community’s tax payers.

And Ward isn’t the only one at BCSD with a curious mind. It is her board, she says, who asked that Carter join them at one of their monthly board meetings.

“It will open up discussions,” Ward says. “Whether it goes anywhere, that’s up to the board. But this is just an initial conversation.”

According to a draft copy of the Nov. 13 agenda, the Beaver Creek school board will also discuss classroom social contracts, as well as the school/public library’s new learning lounge.

From 5 p.m. until 7 p.m. Monday, Nov. 20, Yavapai College staff will be on site at the learning lounge, which was formerly a meeting room between the library and the district/school office, to help prospective college students with their financial aid application – FASFA – and their spring semester application.

A copy of the Nov. 13 agenda will be available within 24 hours of the 5 p.m. executive session at http://www.bcs.k12.az.us/Governing_Board.