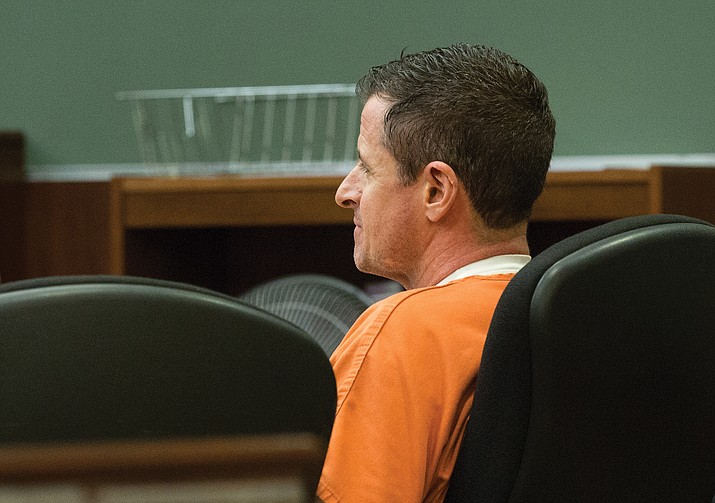 Nov. 21, 2014 – Collins, with a suspended license and under the influence of methamphetamine, fell asleep at the wheel and crossed over the center line on the SR 260, injuring a van of eight people. Five medical helicopters were lined up on the highway that evening to receive the three adults and five children to fly them to trauma centers.

Feb. 11, 2015 – Just before 10 a.m., Collins is arrested by the Camp Verde Marshal’s Office and PANT drug enforcement team for possession and sale of dangerous drugs and paraphernalia, as well as for drugs found in his possession at the time of arrest.

April 2015 – Collins is charged with promoting prison contraband while in jail.

June 18, 2015 – Collins is indicted on 23 more counts related to the November accident. He pleaded not guilty to all of the charges.

July 13, 2015 – Collins appears in court for a conference. A substantial amount of disclosure is gathered.

Sep. 14, 2015 – Collins listens to a Donald hearing in court. If convicted on all three cases on all counts in the accident case, he could be sentenced to a total of 168 ¾ years. The maximum under the plea deal 81.25 years with a minimum of 38.

Oct. 19, 2015 – Jeremy Hutchinson and Sabrina Champ testify to Judge Bluff they are disappointed in the plea’s charges of attempted assault rather than assault. Judge Bluff agrees, citing that Collins has not accepted responsibility for the accident and should be charged with aggravated assault in the plea deal.

Nov. 25, 2015 – Collins rejects a modified plea agreement to settle criminal cases filed against him. The plea is withdrawn. Trial dates are set to begin July 6 through 22.

Nov. 15, 2016 – Collins requests a new lawyer and 10 days to file motion to withdraw plea. Collins tells Judge Bluff his family will hire him a lawyer, to which Bluff does not object. State attorney Alex Harris is later assigned as advisory council.

July 18, 2017 – An evidentiary hearing is held. No manifest injustice is found in the entering of Collins’ plea.

The sentencing is just shy of the three-year mark since Collins, 46, crossed over the center line on SR 260 and struck a van of eight people head-on just days before Thanksgiving.

Victims included Jeremy Hutchinson and Sabrina Champ - a couple and their five children, as well as Jacob Josephagin.

This story originally reported that Sabrina Champ "lost her unborn child in January due to injuries from the accident."

The story has been corrected to state, "Champ, who was pregnant and in the passenger seat at the time of the accident, lost her unborn child in January 2015. The Hutchinson-Champ family argued that Collins should be responsible for the death of the couple's unborn child, but he was not charged in the death."

Champ, who was pregnant and in the passenger seat at the time of the accident, lost her unborn child in January 2015. The Hutchinson-Champ family argued that Collins should be responsible for the death of the couple's unborn child, but he was not charged in the death.

Collins, who was driving on a suspended license and under the influence of methamphetamine, fell asleep at the wheel Nov. 21, 2014. That evening, five medical helicopters flew the eight victims to trauma centers in both Flagstaff and Phoenix.

Collins’ case has spent a lot of time bouncing around plea deals; Collins was offered a first plea in 2015 that would have sentenced him between to 21 to 25 years.

Hutchinson and Champ testified in court they felt the attempted assault charges were not justice, as Collins would be pleading to assault. Judge Bluff agreed with the couple and the plea was modified. Collins rejected the modified plea in November 2015.

The case began to move to trial. The amount of charges and victims would require several months’ work for the state attorney’s office. The scheduled July trial date was vacated to October 2016 due to scheduling conflicts.

Springer had received an analysis from a collision re-constructionist and the evidence was damning.

“The report was terrible to us. I couldn’t call him as a witness. It was about as poor as it could have been,” Springer said at a later evidentiary hearing.

Collins later wanted to revoke his guilty plea. Springer told Collins if that’s how he wished to proceed, he should request a new lawyer.

At the evidentiary hearing to review whether a manifest injustice occurred, Collins testified that he took the plea because Springer told him if he refused the plea he would likely spend the rest of his life in prison. Collins faced over 168 years if found guilty on all charges.

State attorney Michael Morrison claimed that Collins’ had “buyer’s remorse” because he had pleaded to a lengthy sentence and was now changing his mind. Morrison also argued that Collins’ plea was entered knowingly and intelligently.

At Collins’ previous court date on Oct 3, Alex Harris, who is serving as advisory council to Collins, requested a 30-day continuance in setting a sentencing date.

Judge Bluff was adamant on setting a November date and vacating if necessary.

The denial means Collins' sentencing can no longer be put off. He faces 21 to 25 years in prison.