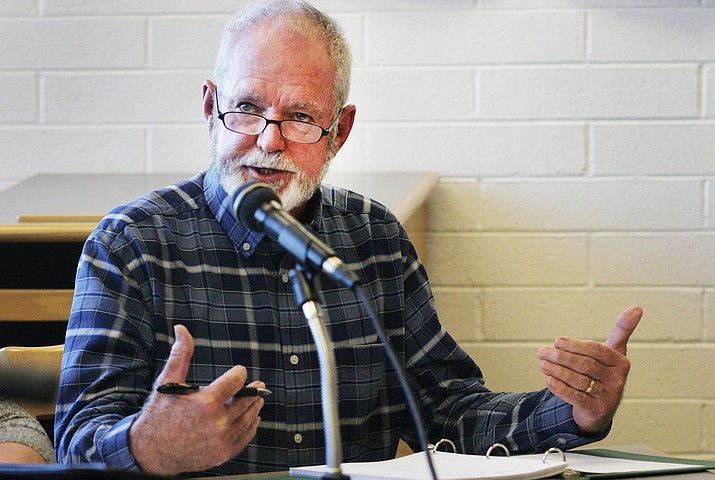 Consolidation Committee Chairperson Dan Mabery: “We are not charged to have an opinion on the consolidation issue, but to fact find and draw up a list of pros and cons.” (Photo by Bill Helm)

COTTONWOOD – At one point during Tuesday’s consolidation committee meeting, Steve Gesell asked that if a merger of the Mingus Union and Cottonwood-Oak Creek school districts “doesn’t make sense fiscally, then why go forward?”

The Mingus Union school board member later said he didn’t mean to imply that unification or consolidation were only viable as a matter of profit.

“I agree with you abundantly,” Gesell said to fellow committee member Sonny Zale, who asserted that despite the debate of savings margin, partnering the two districts “won’t cost us more money.”

The first hour-plus of the fact-finding committee’s first meeting Tuesday was spent discussing the perceived savings based on a document provided by former Mingus Union board member and consolidation/unification proponent Andy Groseta.

Titled ‘Reasons to Consolidate/Unify: Mingus Union High School with Cottonwood-Oak Creek High School, the document is a collection of estimated cost savings and was circulated by committee member Jerry Brown, who is also part of Groseta’s pro-consolidation/unification group.

“I would like to see some discussion in the committee on whether this is better for our students. I don’t know that anyone can validly question if money would be saved as a result of eliminating administrative redundancy by consolidation, and those dollars could be funneled back into classroom dollars which, in other words, is increasing teacher salaries,” Finger said. “At the end of the day, if the savings is far less than $1.4 million, but still provides a better educational model for the students of this committee, then it is worth pursuing.”

Mabery said that his desire for the committee is that “this will not be a drawn-out process, as much of this information has already been read and processed by some of the committee members. We are not charged to have an opinion on the consolidation issue, but to fact find and draw up a list of pros and cons.”

The committee agreed Tuesday that its next meeting would be on Nov. 28 at Mingus Union High School.

Between now and the Nov. 28 meeting, committee members will look into the fiscal impact of the exclusion of the cement plant from the formation of a new district and the district’s boundaries, as well as confirm the projected cost savings number, teacher salaries, and Prop 301 Funds 112 & 113 information in the Groseta document.

Cottonwood-Oak Creek Board Member JoAnne Cook said that though there “may not have been consensus on the purpose of the committee, most of the members agreed that the topics for the committee to research are fiscal impacts, student impacts, community impacts, and staff impacts.”

“I think that looking at clarifying and updating the studies that have already been done is the best use of the committee’s time,” Cook said.

“Then the committee needs to assemble current financial numbers,” Terbell also said. “I believe we will need to look at our peer group numbers for similar unified districts of 3000 +/- students and look at their organizational charts to ascertain what our combined district could look like.”

Said Glazar on Wednesday, the committee is “going to dig in and get all the information.”

“If we knew consolidation as the best for our students, we would move forward,” Glazar said. “Why wouldn’t we? I think everyone has the same goal in mind. Be open minded, look at the facts and do what’s best for the kids of our community.”

The next meeting of the consolidation/unification committee is scheduled for 4 p.m. Nov. 28 at Mingus Union High School.