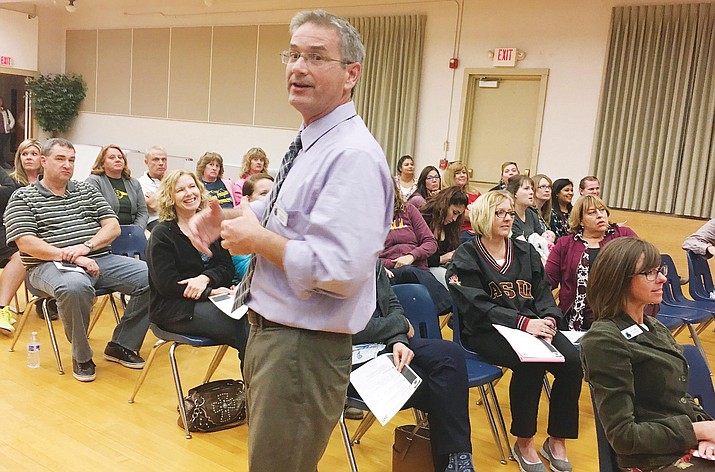 Wednesday, Cottonwood-Oak Creek Superintendent Steve King talks to a group of about 50 interested parents and community members about the possibility of the district converting three schools into two K-8 schools. (Photo by Bill Helm)

But Wednesday’s public meeting at the school district’s office gave the community its first opportunity to weigh in – and to listen up – about the possibility that three of its district’s five schools could become two K-8 schools as early as 2018-2019.

First-year Superintendent Steve King admitted to about 50 members of the community that he does “love K-8” schools.

Before he became the district’s superintendent, King spent the prior two years as former Superintendent Barb U’Ren’s assistant superintendent. One of his responsibilities had been to look at creating a common culture, vision and expectations in curriculum between Cottonwood Elementary, Cottonwood Middle and Dr. Daniel Bright schools.

King said Wednesday that should the district expand two of the school’s programs to K-8 and close the remaining school would help the district better deal with the state school system’s growing economic needs, as well as keep children together in a particular school not only with their siblings but also with their teachers and administrators for as many as nine years before moving onto high school.

“Because education is about relationships,” said King, whose exploration results from the Cottonwood-Oak Creek school board’s 4-to-0 vote in a Nov. 9 special meeting.

The Cottonwood-Oak Creek board first “discussed the possibility of merging three in-town schools into 2 K-8s at the Nov. 7 governing board meeting as part of a discussion on superintendent goals.

According to Cottonwood-Oak Creek School Board President Jason Finger, the idea “was born [of a] desire [to improve] reading and math performance after the recent AzMerit report.”

Finger also said that “with the board’s request for continuation of the budget override, the board was also looking at how we can improve efficiency.”

With a 2,700-student capacity, COC schools current serve about 2,000 students, with “between 30 and 35 classrooms that are not being used as classrooms between the three schools.”

In Arizona schools, a penny saved truly is a penny earned. Though King is adamant that this exploration is in its infancy stage, he told the public Wednesday that he is looking at implementation for fall 2018.

“However, there are still too many unknowns to commit to that timeline,” he said. “We don’t want to be in a rush to make a mistake. We’re going to be intentional and strategic.”

King said he hopes to have a recommendation for the COC school board by the January meeting, “though that too is subject to change.”

If the Cottonwood-Oak Creek school board were to move forward with a plan to merge three schools into two K-8 schools, then the district would have four schools – and each would be a K-8.

Dr. Daniel Bright School is currently a K-2 school, Cottonwood Elementary School is a grade 3-to-5 school, and Cottonwood Middle School serves children in grades 6-to 8.

Wednesday’s meeting was the first of several opportunities for the public to provide feedback and gather information on what the district considers doing with the three schools.

King stressed that “no decision has been made, other than to explore the desirability and feasibility of the idea.”

At this time, the district has tentatively made plans for additional public meetings on Nov. 29 and on Dec. 6.

Cottonwood-Oak Creek is a five-school district. The district’s other three schools, Oak Creek School in Cornville, and Mountain View Preparatory in Cottonwood, are already K-8 schools.

On Nov. 9 in a special meeting, the Cottonwood-Oak Creek school board directed King to look into the possibility of merging Dr. Daniel Bright, Cottonwood Elementary and Cottonwood Middle schools into two K-8 schools as soon as the 2018-2019 school year.

Less than a week later, the district – led by its superintendent – held a public meeting Wednesday to answer questions and disseminate facts about the possible in-district merger.

As the process has just begun, King admitted Wednesday in his opening remarks that “I don’t know answers to a lot of the questions.”

Cottonwood-Oak Creek is a five-school district. The district’s other three schools, Oak Creek School in Cornville, and Mountain View Preparatory in Cottonwood, are already K-8 schools.

King told the public that the possible merger would be an opportunity to keep students together at the same campus, with the same teacher and administrators, for as many as nine years.

Though Clarkdale resident Connie Calhoon asked King a question about the sports teams within the district, she was also “mostly concerned why [the district] wanted to revert to an older model.”

“I feel like the majority [of people in attendance] were still looking for more information,” Calhoon said following the presentation. “Like he said, there’s a lot of unknowns.”

Mingus Union volunteer Roxanne Mitchell asked how the district would reconcile the different methods of education between the K-6 students and the seventh- and eighth-grade students.

“You kind of run seventh and eighth differently,” said Mitchell, a retired educator from the Stockton, California area. “People had good questions. I didn’t get that sense that people were digging their feet in.”

Said King, the K-8 school system could be summed up in the word RISE: which stands for relationships, innovation, students, and effectiveness.

• Relationships, whereas teachers and staff support the child academically, socially and emotionally;

• Students see an increase in academic achievement, increase in teacher-student connection and increase in leadership and mentoring opportunities;

• Effectiveness is a result of maximized efficiencies, as well as consolidated, optimized and streamlined services.

Wednesday’s meeting was the first of several opportunities for the public to provide feedback and gather information on what the district considers doing with the three schools.

King stressed that “no decision has been made, other than to explore the desirability and feasibility of the idea.”

At this time, the district has tentatively made plans for additional public meetings on Nov. 29 and on Dec. 6.