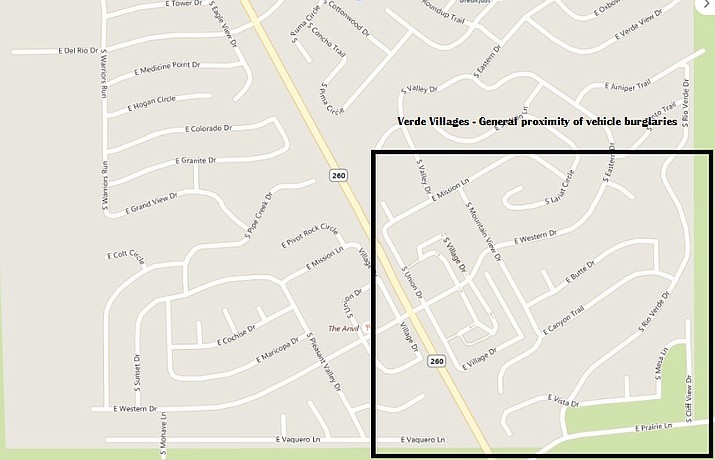 Just after 5 a.m. Thursday, YCSO deputies were dispatched to Verde Village units No. 2 and No. 4 regarding several vehicle burglaries. (Map courtesy of YCSO)

VERDE VILLAGE – Eleven victims’ vehicles were burglarized during a Wednesday night crime spree in Verde Village. In every instance, the vehicles were left unlocked.

Just after 5 a.m. Thursday, Yavapai County Sheriff’s Office deputies were dispatched to Verde Village units No. 2 and No. 4 for reported vehicle burglaries.

The burglaries were discovered as residents prepared to drive to work or while deputies canvassed the area, according to a YCSO news release.

Deputies believe that the suspect(s) were likely in the area between the late night hours on Nov. 15, and the morning of these reports.

One of the residents indicated he interrupted a burglary as he heard someone call out when he went outside to warm up his car earlier that morning.

“Many of the victims were fortunate and lost no valuables and others only lost some cash and/or coins left in their vehicles. Several vehicles contained expensive tools and credit cards that were left untouched,” stated the release.

YCSO said this was likely a crime of opportunity and deputies believe area juveniles may be involved. Residents should note there is always a possibility suspects could return after seeing some of valuables kept in victim’s vehicles.

Deputies are asking everyone in this area to remove valuables and lock unoccupied vehicles. There has been a rash of unlocked vehicle burglaries throughout Yavapai County communities over the past few months. In many cases, unattended firearms have been stolen. The Sheriff’s Office continues to remind residents to simply lock their car when parked to prevent a theft. Noise is a suspect’s enemy, so forcing entry into vehicles under these circumstances is unlikely.

Anyone with information on suspects in these crimes is urged to call the Sheriff’s Office at 928-771-3260 or ‘Tipsters’ may call Yavapai Silent Witness at 1-800-932-3232 with information and they never have to give their name.