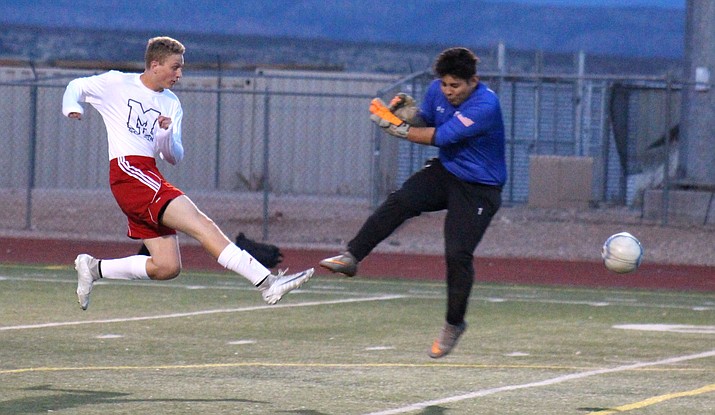 Despite missing their coach for part of the offseason, Mingus Union boys soccer is on the rise.

“We had a great turnout for try outs, which is heartbreaking because you know you can’t keep everybody, but at the same token you get a lot of kids to choose from,” Calvin Behlow said. “I think we had 64 sign up. We had about 57 actually show up to try outs.”

After he let the numbers shrink a little due to eligibility issues, Calvin Behlow decided to carry a larger than normal JV team.

The Marauders had 19 freshmen try out and nine seniors and since they don’t have a freshmen team, the seniors can’t play JV and they were too good to cut, they ended up with a large JV team.

“I just thought I’d keep them all together instead of splitting them up and trying to decide which ones are the better group,” Calvin Behlow said. “We kinda let them understand that there’s only so many minutes in a game but we’ll try and get as many kids in as we can.”

Some 4A schools have JV ‘B’ teams, which are basically freshmen teams but no one else in the region had one so the Marauders couldn’t have one, plus they don’t have enough kits. Mingus Union has 20 varsity and 19 JV players.

“I only have 20 uniforms for each,” Calvin Behlow said. “I have one more uniform for JV but it’s like an extra large and nobody wants to fit in it (laughs).”

The increase in popularity comes after Calvin Behlow resigned in the spring to get the chance to see his daughter play on the girls varsity team. However he decided to come back after boys players asked him and a replacement hadn’t been found.

Senior Eric Samano said Calvin Behlow is a good coach because he is honest with the team.

This is Calvin Behlow’s fifth season as head coach.

“It’s pretty cool,” said senior Kevin Ornelas about Calvin Behlow returning. “We’ve had a pretty cool relationship always with Behlow, so it really helps out him stepping up again to be able to coach.”

Calvin Behlow said so far his son, senior Ezekiel Behlow, who has coached since he was three years old and Ornelas and Samano, the other expected captains are players that have been impressive so far this year.

“Probably skill wise the best player on the field is a kid named Jovany Garcia and is only a junior and he’s playing really, really well,” Calvin Behlow said. “Guys striking the ball well, we had a guy named Bradley Howard come back as a junior, who didn’t play last year and he’s come back and you can tell he’s a little rusty, but man when he kicks it right it’s what you want.”

On Monday the Marauders scrimmaged Bradshaw Mountain and held their own against a side that beat them 3-0 last season.

“I think what’s great about the Grand Canyon Region is I think we’re pretty even across the board,” Calvin Behlow said. “I mean I talked to the Prescott coach, he’s got some seniors and some juniors that are playing well, Coconino’s always strong, Flagstaff’s always strong, Bradshaw Mountain is the defending conference champion, so Mohave is a great school, they always produce a top notch team I think it’s wide open.

Last year the Marauders went 2-3 in the region.

“I think any team can win a 3-0 game but any team can lose a 3-0 game too,” Calvin Behlow said. “I think it’ll just be how the chips fall. Here’s hoping the weather stays good, I mean we didn’t get to play everybody last year because of all the snow.”