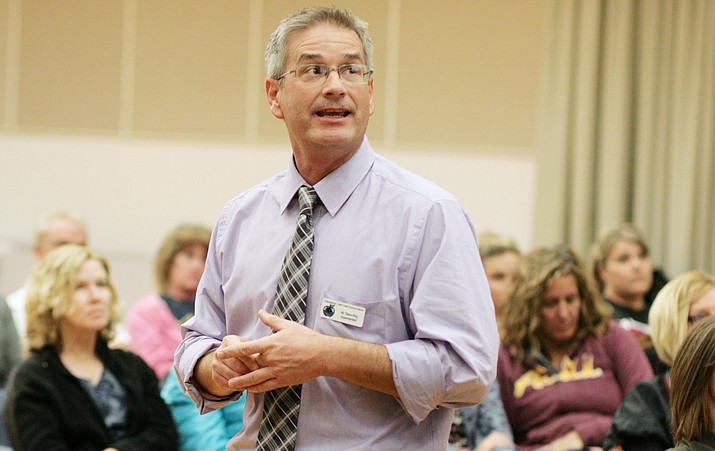 COTTONWOOD – Wednesday at the Cottonwood-Oak Creek School District Office, Steve King will lead the district’s second of three public forums as it considers merging three of its five schools into two K-8 schools.

As King, the district’s first-year superintendent considers the pros and cons of merging Dr. Daniel Bright School (K-2), Cottonwood Elementary School (grades 3-5) and Cottonwood Middle School (grades 6-8), one of the many questions he is asking himself and the community is whether COCSD should “get rid of middle schools?”

That very question was posed by Jessica Poiner of Thomas Fordham Institute in the April 10, 2015 publication of the Ohio Gadfly Daily.

Poiner’s paper, “Should districts get rid of middle schools,” is one of a few documents King presented Tuesday to district administrators, the same documents he will present Wednesday as the community collectively ponders not only a merger but also which of the three schools to close.

‘Who should attend which school?’

Another question King asks is “who should attend which school?”

King says that until the district has established what the mission and the vision of the two schools is established, it’s not possible to know which school would best meet the needs of which children and their families.

Though it’s somewhat premature to prioritize a date for such a change at COCSD, King says his target would be fall 2018.

But wondering whether “so soon” is “too soon” is “not a rhetorical question,” King says.

“It’s a serious question,” the district superintendent says. “If it would be prudent to wait – for whatever reason – then that’s what my recommendation would be. However, our thinking and planning is for the 2018-2019 school year.”

Doing his due diligence

King has been working on a feasibility of facilities study, as well as researching the efficiency of the K-8 model and its advantages and disadvantages.

The questions King continues to ask himself – the same question he will as the district’s administrators and the general public – is would a merger “be good for children and their families?”

In a world rife with change, King says that transitions are “already hard enough for kids.”

With the exception of COCSD students who attend either Mountain View Preparatory or Oak Creek School, the community’s students attend three different schools before they leave the district’s nest to attend Mingus Union High School.

King says that merging the three schools into two K-8 schools would “cut those transitions in half.”

Besides possible boundaries – or the lack thereof – King also points to transportation, playgrounds, athletics, food service, scheduling and early childhood opportunities as some of the many areas to consider in a possible merger of the schools.

Wednesday’s meeting will be held at 6 p.m. in the gymnasium at the Cottonwood-Oak Creek School District Office, located at 1 N. Willard St. in Cottonwood.