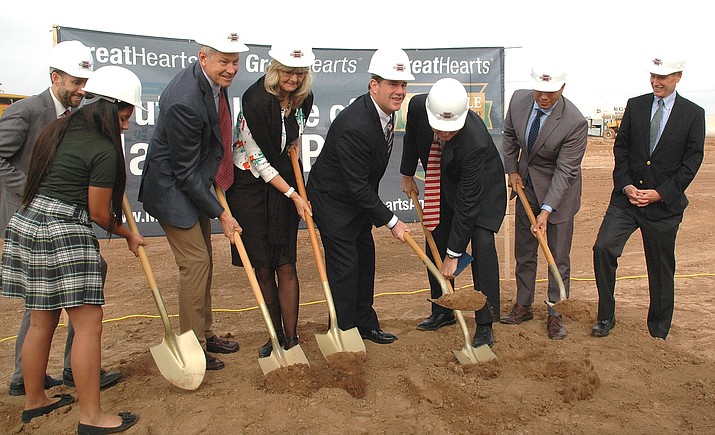 Gov. Doug Ducey, center, helps break ground Wednesday for a new branch of GreatHearts Academy, a nonprofit charter school network. The campus is being financed with public help state because of legislation pushed by the governor to have the state guarantee payment on its borrowing. (Capitol Media Services photo by Howard Fischer)

PHOENIX -- Gov. Doug Ducey is fighting back against a report by a left-leaning research group that shows Arizona is spending less on K-12 education today than before the recession when inflation is taken into account.

"That's a false report by a left-wing public interest group,'' Ducey said Wednesday just moments after helping break ground for a new charter school in west Phoenix which is being built, at least indirectly, with the help of the state treasury.

"It's up 10 percent since 2015,'' the governor said. "It's above per-pupil rates, inflation adjusted since the Great Recession.''

But figures obtained by Capitol Media Services from state legislative budget staffers paint a different picture of what's happened since before the recession than the one being claimed by Ducey.

The report from the Joint Legislative Budget Committee shows state aid to K-12 in the 2007-2008 school year at $5.12 billion. That has increased to $5.33 billion in the current budget year.

Ducey said the state really had no choice but to cut funding during the recession.

"We went through a tremendous downturn,'' the governor said.

Now, he said, the budget is balanced And he touted the $163 million in additional dollars put into K-12 this past budget year above and beyond inflation and student growth.

But only half of that $163 million is ongoing funding, with the rest being a one-time infusion, mostly for new school construction.

The report by the Center for Budget and Planning Priorities acknowledges that things have gotten better lately. But their numbers, over the whole period, are pretty much in line with those of the JLBC despite Ducey's protestations that the CBPP numbers are inaccurate.

And gubernatorial press aide Daniel Scarpinato later acknowledged that inflation-adjusted student aid is still below where it was in the 2007-2008 school year, before the recession.

Ducey's response to the CBPP report following an event where he helped break ground for a new charter school for Great Hearts Academies. The nonprofit organization runs 29 schools in Arizona and Texas.

Part of the financing is coming, at least indirectly from the state, the result of a measure Ducey pushed through the Legislature in 2016 for "credit enhancements'' for charter schools with the state effectively guaranteeing lenders that the loans will be paid back. That assurance, in turn, lowers the interest rate that lenders are charging.

In this case, Great Hearts spokesman Bill Odell said the state's backing of its $16 million bond reduced interest by about a quarter point, saving the school about $4 million over the life of the loan.

The governor said that comports with his goal of creating more educational opportunities, with the loan guarantees enabling schools with waiting lists to construct new campuses.

That, however, still leaves the question of what is happening at traditional neighborhood public schools, particularly in low-income areas.

"We have not been providing the education those kids deserve,'' the governor said. He said that finding ways to build more charter schools "is part of the solution.''

"This is one more tool in the toolbox,'' Ducey said.

But the report and the groundbreaking for the charter school come as the state faces a lawsuit filed by traditional public schools who charge the state is failing to meet its legal obligations to not only construct new schools and make major repairs but also to provide dollars for other capital needs ranging from computers to buses.

The basis for that lawsuit are three separate Arizona Supreme Court rulings that spell out the state's responsibility for adequate funding for buildings and facilities.

Lawmakers eventually approved a funding plan that was supposed to ensure new schools were built when needed and existing ones were kept in repair.

That lawsuit pegs those need at close to $300 million a year; the budget approved for this school year by the Republican-controlled Legislature and signed by the governor provided $62 million for new construction and $17 million for repairs.

In response, an attorney for the state did not dispute the current funding numbers. Instead, Brett Johnson told a judge that she has no authority to decide if the state is providing enough money, calling it a "political question'' beyond the powers of the courts.

The question of how much the state is providing to public education -- and to traditional public schools in particular -- comes as polls show voters say they want more money for schools. There also is evidence they are willing to raise their own taxes to do that, something Ducey has adamantly opposed.

That question of adequate school funding also could dog Ducey into next year's gubernatorial race where he will face off against one of two Democrats, both of whom have made education a prime focus of their campaigns.