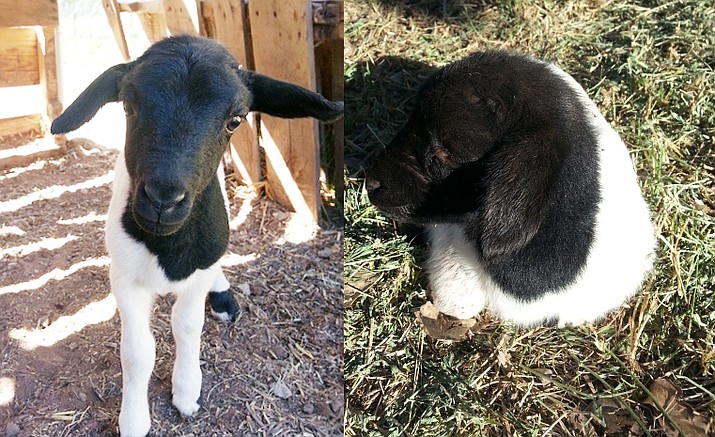 Okay, they weren't precisely a surprise. I could see that Tiny was pregnant. But as of yesterday she didn't look nearly as tubby as she'd looked with her first lambs, so I figured there was another month to go.

Moreover, there were none of the signs I'd seen the first time, except that yesterday her udder went "poof" and became a balloon.

At 4:15 AM Sunday morning, I heard Tiny bleat. Once. This after a night when the coyotes, and therefore the dogs, were excessively active. I woke up twice, listening to the pack warbling, their noise just a little fainter than Moosie's bark and a lot fainter than Bear's bark. That Moosie was barking said he thought whatever was happening was dangerous.

That Bear was still barking from the porch said that he didn't agree, and saw no reason to move if it really wasn't going to turn into a problem.

As I listened, I went through the animals and their containment. Yes, the turkey barn was closed and locked. Yes, the chicken coop was shut, all three doors locked. Yes, the sheep were locked in the orchard, surrounded by sturdy chain link.

As for piggy girls, the last I saw they were snuggled down in the straw in the same spot where they were born. The door to that area was wide open, but at this point, those girls are pretty much predator proof.

Thanks to my friend Lu, I recently measured them to figure out how much they weighed. As Lu instructed, I took two pieces of baling twine, stretched one piece from behind the biggest girl's ears to in front of her tail and cut it (then tucked it into one pocket), then took another piece and wrapped it around her hearth girth--just behind her front shoulders. After snipping that one to size and putting it into a different pocket (very good advice), I came into the house to measure my twine. Once I had my measurements, I squared the heart girth, then multiplied the squared girth by her length and divided by 400.

I gotta pause here. That formula is one of those pesky, weird things about life that troubles me. Who sat down to figure out how to use these two numbers to come up with a weight? And how in the world did they come up with what they did, and why does that work? It's a mystery for sure.

Much to my surprise, my biggest girl was closing in on 225 pounds! She was the first born and the one that looks the most like a Hampshire.

She's got a neck on her like an NFL center.

Excited, I went back to weigh the smallest one, Little Blue-eye. She's one that delicately sips from the hose, making little slurpy "this-tea-is-too-hot" sounds as she does. She was at 175! Hokey Smokes!

I knew they were getting big, but I lacked any sense of how big.

As for any predator trying to take one of them, let's just say that the other day the pig-pack decided to enter the orchard while the sheep flock was in there. The next thing I knew Cinco had politely excused himself and retreated around the corner of the orchard. Apparently, he's head-butted them one time too many and they have convinced him it's wiser to not do that. Yeah, they're probably predator-proof, especially with two big dogs certain to come help out in the fray.

Back to 4:15 AM and Tiny bleating. Because I only heard the one bleat and it wasn't followed by Moosie barking (he's a better predictor of a threat than the big guy), I didn't go down until there was light enough to see. That's when I heard the faint little baby "baa".

Sure enough, she'd dropped a pair of little boys between 4:15 and 5:45. By the time I saw them, she had them cleaned and one of them was tiptoeing around. While I returned to the house for a towel, just to be sure they were dry, Moosie paced outside the orchard, desperate to get in. Honestly, that dog is a born midwife. The minute I opened the gate, there he was cleaning the newest one, Tiny letting him do it without complaint. I toweled them off, made sure they were moved into the sun, then cleared out the other three sheep (and one persistent dog) so mom and babies could have some bonding time.

An hour later she'd finished up and the little guys had found their bounces. Welcome lambikins!