Camp Verde athlete of the week: Jones works so hard that his coach moves him around to rest him 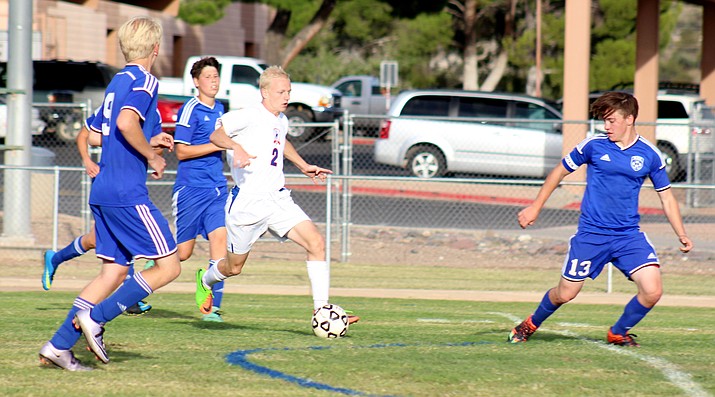 Camp Verde junior Joseph Jones dribbles through the Northland Prep defense on Sept. 26. Jones is a captain for the Cowboys and plays every outfield position for Camp Verde. (VVN/James Kelley)

Jones, a junior, is so active on the field that Miller wonders if he plays him too much. So to save energy, he moves Jones around.

“Joseph is like the Energizer Bunny out there,” Miller said. “He always goes full throttle. I should probably pull him off the field more, so he can run down, but it’s like one of those things, he likes to be on the field, he plays hard on the field, all the time rarely is he off I’ll usually slide him around to other positions so we can rest while he’s on the field. He’s just a real leader on the field, understands the game really well and plays with a lot of intensity. He’s just a solid player.”

Jones is a captain and plays every position for the Cowboys except goalkeeper.

“He’s a great example to the younger player of how to be,” Miller said. “He’s an excellent student. So he balances everything between his school work and his work ethic on the soccer field, it’s just excellent.”

VVN: How’s the season been going for you?

Jones: I’d say it’s going pretty good. It started off pretty well, I was scoring pretty good but as time went on I, I don’t know, lost my touch per se. I’ve had lots of opportunities but haven’t been quite able to finish them but at practice I’m working more on my shots. Being more accurate, I got three goals in, so that was nice, getting my scoring back on.

VVN: I talked to (senior) Nate (Schultz) about moving around last week, have you moved around and how is it affected you?

Jones: Sometimes when I get tired up there or I don’t feel like I’m doing much, because I’m not that big and they have some big defenders, I’ll send Nate up there since he’s a pretty big guy and he’s pretty quick, so I’ll take his spot in defending because I’m pretty fast as well and he goes up there and he can score. That’s why we tied Show Low 1-1.

VVN: What’s it like for you, moving back, how much difference is for you I mean?

Jones: It’s not much different because the ball is everywhere I basically go and when I’m defense it’s constantly there and when I’m forward, they get it up to me and I do my best.

VVN: So which one do you like playing better, striker or defender?

Jones: Probably defender because I just love it when I take the ball away from them and their facial expressions, frowns (laughs).

VVN: How long have you been playing soccer?

Jones: Since I was five.

VVN: How did you get into it?

Jones: My parents were getting me into sports, I played basketball and other sports, like cross country and I didn’t really like them but when I met soccer I had a passion for it.

VVN: I was just going to ask, what other sports have you played?

Jones: Basketball, track, you know cross country, I was on the swim team, the dive team, it wasn’t my specialty (laughs).

VVN: Do you have a favorite pro soccer team?

Jones: Because Messi’s on there (laughs), he’s my man. He’s just amazing with his feet and how quick he is and how he controls it. It just amazes me.

VVN: Do you ever see the moves he does and try to emulate them?

Jones: I’ve tried but I’ve always tripped over and fallen on my face.

VVN: What’s the most fun thing about playing soccer?

Jones: Working as a team, it’s a team effort and when you’re feeling down, you have a teammate to lift you back up. It’s a team effort, you can’t really do it by yourself.

VVN: What kinds of things are you into outside of sports?

VVN: What video game systems do…

Jones: I play Call of Duty.

VVN: Do you know what you want to do after high school?

Jones: I want to join the fire department. I’m not sure exactly which one.