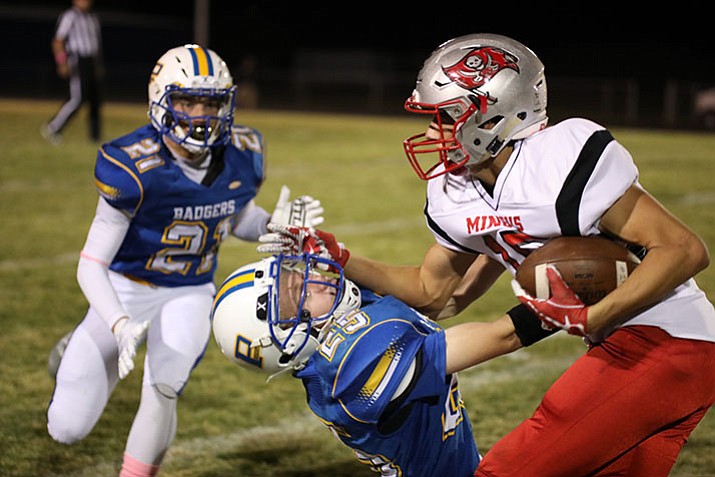 PRESCOTT — What a difference a week makes.

A week after its disappointing Homecoming loss, Mingus Union football (3-4, 3-1 Grand Canyon) rebounded to run wild over No. 12 Prescott 38-6 on the 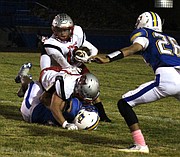 Mingus receiver Chaz Taylor bowls over Prescott defender Nick Robishaw (25) as Hunter Kronberg (21) comes in to help. The Badgers surrendered 538 yards on the ground defensively in a 38-6 loss to Mingus on Friday, Oct. 6, in Prescott. (Jim Clark/Courtesy)

“I think they were embarrassed last week, that was as bad as we’ve played in a long time, I think they took it to heart,” said Mingus head coach Bob Young. “They could have tucked tail and they decided that they wanted to work hard and get better and they had a really good week of practice and I was really proud of that. The seniors stepped up and we looked like a whole different team (Friday) night.”

A week after previously winless Bradshaw Mountain dominated the line of scrimmage against them, Mingus Union ran for 538 yards against the Badgers (4-3, 2-1). Marauder junior running back Alex Nelson ran for 215 yards and two touchdowns on 24 carries.

After giving up a field goal to start the game, the Marauders went on a 38-3 run.

Young said they took a step back in the loss to the Bears and so they challenged the Marauders.

“The young offensive line did a great job and our skill guys blocked,” Young said. “We have good running backs, we just gotta be able to block for them and they had a heck of night (Friday) night.”

Senior running back Tyler Kelly rushed for 240 yards and two touchdowns on 23 carries. He also caught a 37-yard touchdown pass and accounted for 277 yards of total offense.

“It felt amazing,” Kelly said. “It felt so good to finally win and have a good game and play a solid game the whole entire game.”

The Marauder defense also shined, holding the Badgers to a season low six points. Prescott had scored 27 or more points in four of their six games before Friday night.

Mingus running back Tyler Kelly pancakes a Prescott defender as running back Alex Nelson carries the ball. The Marauders ran for 538 yards in the 38-6 rout. (James Kelley/VVN)

Badger senior Ryan Greene rushed for 233 yards in 16 carries in their 35-14 win over Mohave the week before.

After the loss to Bradshaw Mountain, Mingus Union dropped to 24th in the rankings, from No. 17. The win rights the Marauders’ ship before they host Flagstaff on Friday.

“It’s a relief off our shoulders,” Nelson said. “We really worried coming into this game, so this win kinda lifted a chip off our shoulder and now we got the green team.”

Young said they’ve thought all along the Flagstaff, the Maruaders, Prescott and Bradshaw Mountain were all the same.

Those four teams have combined for three region losses and sit atop the Grand Canyon Region.

“It’s whoever plays the best that particular night,” Young said. “(Friday) night was our night and Prescott, they’re a fine team, they just didn’t play their great game and that was sort of like us last week.”

“If we can beat them next week then there will be a log jam, so that’ll be another battle for us,” Young said.

Mingus Union hosts the rivals on Friday night at 7 p.m.

Kelly said the win over Prescott was vital to keep their championship hopes alive.

“It was huge because we definitely wouldn’t win the region if we lost this game,” Kelly said. “So we gotta win the rest of our region games if we want a shot at all.”