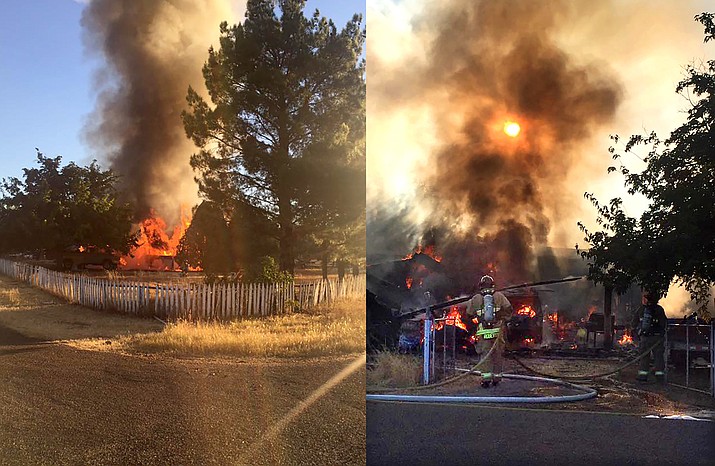 A mobile home and two cars in 3400 block of Stevens Road, in the Verde Lakes Estates area, were destroyed by fire Saturday morning. The home owner was able to escape, but sustained a minor injury, according a news release from Copper Canyon Fire and Medical Authority. (Photos courtesy of CCFMA)

CAMP VERDE – A mobile home and two cars were destroyed by fire in Camp Verde Saturday morning. The home owner was able to escape, but sustained a minor injury, according a news release from Copper Canyon Fire and Medical Authority.

Around 6:48 a.m., CCFMA Stations 81 and 82, along with Verde Valley Fire District; Verde Valley Ambulance; Cottonwood Fire and Medical Department; and Sedona Fire District were dispatched to the residential structure fire in the 3400 block of Stevens Road, in the Verde Lakes Estates area.

Heavy smoke was coming from the home, according to initial reports. Emergency crews arrived on scene to find the single story mobile home heavily involved in fire with multiple exposures around the home, said Battalion Chief Eric Strauss. A defensive fire attack was employed with exposure protection in place.

The home owner was able to exit the home, but sustained a minor injury, according to the release. He was treated and released on scene.

The fire was brought under control in approximately 20 minutes, though the home was a total loss as well as two vehicles, said CCFMA. Emergency crews remained on scene for several hours during the overhaul stage of the incident.

There were no other injuries reported during the incident.

Initial information received from witnesses led authorities to believe that the fire was started by someone seen leaving the area just prior to the discovery of the fire, according to a news release from the Camp Verde Marshal’s Office. Fire and Arson Investigators from Sedona Fire Department were called in to assist. Based on their investigation, the cause and origin of the fire was undetermined.

A person of interest was contacted and interviewed, said CVMO.

The investigation is still ongoing.

Also during the weekend, CCFMA responded to a tractor-trailer fire.

A tractor-trailer carrying seven homes’ worth of furniture and household goods was a total loss after being consumed by fire Friday night on SR 260.

Emergency personnel from Copper Canyon Fire and Medical Authority Station 81, along with Department of Public Safety and Arizona Department of Transportation DOT were dispatched milepost 229.

According to CCFMA news release, arriving crews found the tractor-trailer sitting in the westbound lane of SR260 heavily involved in fire. The tractor had been disconnected from the trailer.

Crews quickly pulled hose lines from apparatus and began fire extinguishment of the trailer and brush that had been ignited by the trailer fire, said Battalion Chief Eric Strauss.

Due to the fire load of the trailer and location of the seat of the fire, extinguishment was long and difficult, said CCFMA. The trailer and its contents were a total loss.

SR 260 remained closed in both directions for several hours. The driver was not injured during this incident, according to the release. The cause of the fire was believed to be hot brakes.