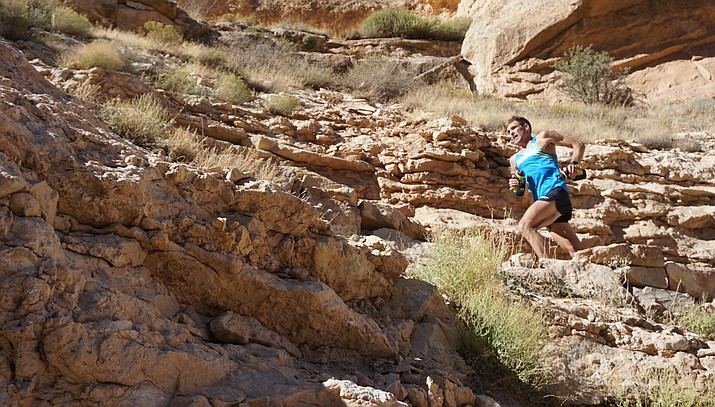 That’s the fastest-ever known 21-mile crossing of the Grand Canyon, commencing with the North Kaibab Trailhead and concluding at the summit of the South Kaibab Trail.

In the annals of Mingus Union High School athletic history, few accomplishments can be discussed in the same breath as the 3200-meter run performance by Tim Freriks April 11, 2009.

It occurred during the prestigious Arcadia Invitational in California. After the race, then Mingus Union distance Coach Jim Bostwick was all set to send an email to a Cottonwood running enthusiast when he became stuck on trying to find the right adjectives to describe the race.

Which, to those not familiar with the sport, meant that Freriks had just accomplished something rarely ever seen in the 105 years Arizona has contested high school track and field.

At the time, Freriks was only the sixth runner in Arizona history to turn the sub-9 trick.

What neither he nor anyone else realized at the time was that he opened the door to what is now realized as the richest period of high school long-distance running in Arizona history.

Freriks had dropped hints of what was to come a few weeks earlier when he won the prestigious Chandler Rotary Invitational with a 9:17.34 performance, besting a Mingus school record that had been on the books for 35 years.

In the Arcadia race, Freriks came through the first mile in 4-minutes, 31-seconds. “I felt good and I knew I could work off that pace,” Freriks told The Verde Independent after the race. “I wanted to run in the low-9 minutes. With one lap to go I heard 7:50 so I thought I had a good shot, but more than anything else I was just trying to win.”

He closed out the race in 2:08 for the final 800 meters and 63 seconds over the last lap, exactly the kind of negative-split racing for which Bostwick had been training him.

Freriks began his Mingus career with a 9:48 clocking as a freshman. He followed that up with personal records of 9:38 as a sophomore and 9:36 as a junior.

As for his senior-season sub-9 performance, Freriks told The Verde Independent in 2009, “It’s kind of overwhelming. It’s something I’ve been working at for four years. When I look at some of the names of the people who have gone under 9-minutes in high school and know what they went on to do later in college, it’s very encouraging.”

The record-breaking practitioner of the path is Cottonwood running legend Tim Freriks, who this past summer signed a professional running contract with the Hoka One One Elite Team.

“The Grand Canyon, it’s something I had wanted to do for a long time and something I thought I was capable of doing,” Freriks said of his record run.

Freriks, a 2009 Mingus Union graduate, knocked about seven minutes off the previous best Canyon crossing, achieved a year ago by one of Freriks’ regular running partners, ultra-marathon great Jim Walmsley.

“He set his en route to a (42-mile) double crossing,” Freriks said of Walmsley’s mark.

For Freriks, the Canyon achievement comes in the midst of a running rebirth for the former Northern Arizona University standout.

After running in two NCAA Division 1 championship races for the Lumberjacks in 2010 and 2011 and earning first-team All-Big Sky Conference honors, Freriks’ NAU career fell flat and to some degree so had his passion for running. “When I finished in 2014, I’d had an up-and-down last couple of years at NAU and yeah, I was burned out.”

He had suffered through sustained illness and an Achilles tendon injury during what was supposed to be the pinnacle of his NAU career. “I couldn’t run,” he said. “Maybe it was just overtraining, or something like mono that aggravated things. Things turned around in the spring of my 5th year at NAU and I was able to start racing again.”

But when he enrolled in a post-graduate nursing program, running took a back seat. Then came the rigors of 12-hour shifts as a young RN, and running was more of an escape than anything else for the 26-year-old Freriks.

“I was working full time in the mental health field and the only running I was doing was trails on weekends, the Grand Canyon and San Francisco Peaks. It was kind of an escape,” he said.

A frequent companion on these “escape” runs was Walmsley, a former high school competitor of Freriks’ as well as a one-time standout runner for the Air Force Academy.

“Jim was the one who inspired me to try trail- and ultra-running,” Freriks said of his competitive running rebirth. “I always saw him as an inspiring figure in the Arizona running community and his encouragement, I guess you could say, pushed me over the edge.

“I came off that couple of years hungry again for the sport of running, looking to compete again and I came into the sport refreshed.”

The traditional marathon is a 26.2-mile race. Ultra-marathon runners race at distances of up to 100 miles.

Freriks’ first shot at the world of competitive ultra-marathon racing came in Lake Sonoma, California, in April 2016 when he finished second to Walmsley in a 50-mile race.

His breakthrough race as an ultra-athlete came in the May 2017 Transvulcania ultramarathon in Spain. He completed the 46-mile course in 7-hours, 2-minutes and won by an impressive 16 minutes over the runner-up, Ludovic Pommeret of France.

His winning effort in Spain put Freriks’ name on the ultra-running world map. He began attracting the attention of running shoe companies who wanted his signature on a promotional contract to launch his professional career.

Ultimately, Freriks – again with some nudging by Walmsley -- signed with the Hoka One One company and runs under its Elite professional banner.

“Being professional, I now get to do something I was already doing before I was a sponsored athlete,” Freriks explained. “I get to travel around to these really gorgeous areas and there is still a huge competitive component to it. It is less of a physical grind than the kind of training you do for track events, but it’s still a huge physical task.”

Freriks has maintained his career as a Registered Nurse around professional running. He typically works three 12-hour shifts per week at Flagstaff Medical Center. Despite that schedule, he also manages to run, on average, 100 miles a week in addition to his travel and competition schedule. He typically goes on 10- to 12-mile runs on the days he works at the hospital. On non-work days, he ups the ante to 20- and 25-mile runs.

For now, he is self-coached. “I think I would drive a traditional coach crazy with the schedule that I work and the training schedule that I have to keep because of my work hours. At the beginning of the year, I lay out a race schedule with higher peaking points, and lower objectives added in between the big-ticket races. After I have my races and goals lined up, I make a training schedule tailored to that.”

Saturday, Freriks won the prestigious Ultra Skyrace in Flagstaff, a 55-kilometer (34 miles) race that featured 10,000-plus feet of uphill running. He won the race by 20 minutes over California ultra-runner Patrick Parcel, and his 5-hour, 24-minute clocking established a new course record.

“Now,” he said, “the big one I am shooting for is the North Face 50-miler from Marin County to San Francisco. It always attracts a top competitive field and the prize money ($10,000 for first place) is some of the best in the sport.”

Beyond that, next year Freriks hopes to compete on the international circuit in Europe.

While his professional contract calls for Freriks to primarily compete in ultra- and trail-running events, he also hopes to participate in some high level road races from time to time.

And, he said, there still could be some track races in his future.