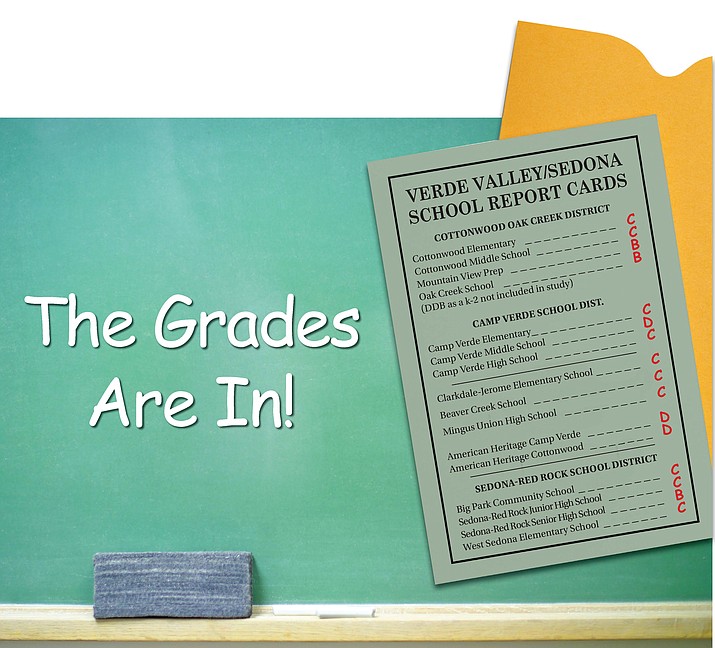 VERDE VALLEY – Boiling down everything a school does into a single letter grade is a “very superficial way of quantifying a school’s effectiveness,” says Tim Carter, president of the Arizona State Board of Education.

“A single letter grade tells us little about the quality of a school,” said Carter, who also serves as superintendent of Yavapai County Schools. “What does a school have to do to get an A in Arizona? And what does it really mean? People don’t know.”

On Oct. 9, the Arizona State Board of Education posted preliminary 2016-2017 A-to-F letter grades for schools to its website: https://azsbe.az.gov/f-school-letter-grades.

Among Verde Valley schools, a B grade was given to Mountain View Preparatory in Cottonwood, Oak Creek School in Cornville and Sedona-Red Rock High School.

Those scores are based on “initial calculations using the currently adopted methodologies,” according to the Arizona State Board of Education’s Oct. 6 Guidance Document for Posting of Preliminary School Year 2016-2017 Letter Grades.

At least one Verde Valley school has challenged its letter grade.

Having four superintendents in a 13-month period – and having missed a B grade by “one one-hundredth of a percent” – were enough reasons for Mingus Union High School to appeal the school’s rating, said Jim Ledbetter, one of the district’s governing board members.

Dr. Penny Hargrove, who has served as both superintendent and principal at Mingus Union since July 1, agrees with Ledbetter.

“We are one point from a B, and believe that the leadership turmoil and lack of a consistent vision negatively skewed that data and opportunity to address the criteria reflected in this data collection,” Dr. Hargrove said.

Deadline to challenge a grade was Oct. 6, according to Jennifer Chilton, Director of Communications for Sedona Oak Creek Unified School District.

Arizona School Accountability Plan for the 2016-2017 school year was adopted by the State Board of Education on April 24, 2017. According to Carter, both creating and finalizing the grading system during the year it was intended to evaluate is akin to “creating the playbook while the game was being played.”

“We were creating that model while teachers were doing their thing,” Carter said.

Grades have not been finalized – at least in part – because SBE is soliciting public input for what it calls “potential revisions” to the preliminary grades.

The State Board of Education will host a series of open houses through Nov. 6 at its Phoenix office, located at 1700 W Washington, Suite 300, each an opportunity for the public to weigh in on the preliminary grades.

SBE has also set up an email account at inbox at inbox@azsbe.az.gov to receive feedback.

In the opinion of Mark Plitzuweit, President and CEO of Edkey Inc. and Sequoia Schools, the State Board of Education is “trying to figure out if [it’s A-to-F grading system actually] works.”

With Camp Verde and Cottonwood American Heritage Academy schools under the Edkey umbrella, Plitzuweit says that “an accountability system is necessary to the growth and sustainability of the educational system in the state of Arizona.”

He doesn’t “believe that the current model is an effective way of measuring school success.”

To see whether or not the evaluative model works, the State Board of Education will include feedback from a Technical Advisory Committee in its review process.

Specializing in data analysis related to K-12 student achievement from all types of school configurations, TAC members and the State Board of Education “will engage in an iterative process with the TAC to conduct independent analyses of data, based on public input, for potential revisions to the A-F Accountability Plan,” according to the State Board of Education website at: https://azsbe.az.gov/f-school-letter-grades.

At the Board’s December meeting, the SBE will provide policy and technical guidance to the advisory committee for modeling needed to finalize revisions to the plan, the State Board of Education website also said.