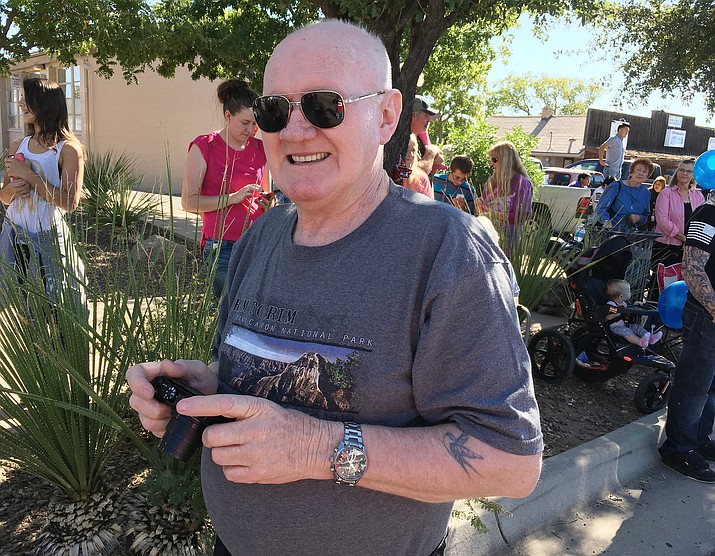 Terry Dwyer travelled 9,450 miles from his Albury, Australia home to visit friends – and to see the Fort Verde Days parade.

CAMP VERDE – Half-way between Sydney and Melbourne, in Australia, is a rural town called Albury. From there it is about 9,500 miles as the Kangaroo hops to Camp Verde.

Saturday, during the 60th Fort Verde Days parade, Albury resident Terry Dwyer talked about his home land, both similarities and differences, as he shot photographs of Camp Verdeans young and old – and many in between – as he enjoyed the rural community’s annual celebration for the first time.

Not too many travelled more than 9,000 miles to be at the Fort Verde Days parade. Each year, the annual Fort Verde Days event brings locals and out-of-towners together like no other Camp Verde activity.

The following are a few of the many stories – and a few of the interesting numbers – which resulted from the weekend of fun:

More than 10 volunteers – 11 to be exact – helped serve 267 meals cooked in Dutch ovens at Fort Verde Days. Says Bill Stafford, who along with Bob Tener cooks all the meals each year, the majority of the meals were served to volunteers and historical reenactors at the Cook Shack between the Ramada and Fort Verde State Historic Park.

“Some of the public made donations to eat,” says Stafford of the $6 gratuity the public was able to pay for lunch on either Saturday or Sunday.

Members of the Excelsiors and their opponents, the Prescott Champions, totaled 23. Which surprisingly enough, was the total score of the game, as the Excelsiors won 13-10.

With four Fort Verde staffers and 10 Fort Verde volunteers, 248 man-hours (and woman-hours) were spent preparing for and running the event.

And that number doesn’t include the reenactors, all 22 of them – and they spent 352 total hours reenacting.

One of Saturday’s happy dozen was a baby in her first-ever photo shoot.

“The most rewarding thing was shooting people’s pictures and giving them a fun experience,” Hammond says. “It’s great to see them so excited about their picture!”

Dr. Huston likens a retina scan to “doing an MRI on the retina.”

Cooking about 500 pancakes and 640 sausages for the collective, Camp Verde Kiwanis volunteer Alice Sordahl made sure that the expected 250-plus early risers could get their share of pigs in a blanket Saturday morning.

One might think there’d be leftovers with all that food. But Another Camp Verde Kiwanis volunteer said yes – actually no.

“We usually run out,” says Gerry Laurito, longtime librarian at the Camp Verde Community Library. “Maybe there’s an extra pancake here or there.”

Parade entries at this year’s Fort Verde Days parade totaled 43, which included local businesses, churches, schools, historical entities and the Colonel’s Daughter, who rode in the parade on her horse with the other Colonel’s Daughter contestants and their escorts, members of the Camp Verde Cavalry.

The amount of hours spent by volunteers connected with Camp Verde Promotions and the Camp Verde Business Alliance, frankly, is immeasurable.