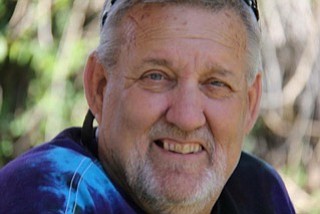 He moved to Montezuma, KS at 3 months old where he lived until 1990. He graduated from Montezuma High School in 1969. Attended Kansas State University for “the party” and pledged Sigma Phi Epsilon.

He later moved to Phoenix, AZ and then onto Durango, CO before returning to Montezuma to run the family ranch. He married Jan Brown on August 3, 1974.  Together they raised daughters Holly, Jessie and Katie on Hedlund Ranch until 1990. In 1990, they moved to Cottonwood, AZ where Kyle worked in construction for Phil Morris Construction and later for Michael Rabaska.

In 1998, Kyle and Jan moved to Fountain Hills, AZ and later settled in Gilbert, AZ where he lived until his death on Friday, October 13, 2017.

He loved his children, grandchildren, nieces, nephews, great nieces and great nephews. He loved fishing, golfing, music, photography, rambling road trips, sports and most of all he loved having a good meal.

He was a great dancer and had the most beautiful voice. His declining health in the last several years made it more difficult for him to do the things he wanted.

However he had great memories of his days at the Sandpit, the lake and rodeos. As well as a life fully lived in health.  His heart was always focused on his immediate and extended family.  So our hearts will desperately miss Dad, Tata, Uncle Kyle, Uncle Tata and his living presence. He was loved!

He is proceeded in death by his Grandmother Zoa McReynolds, his parents Hal and Zoa Hedlund, his brother Chris Hedlund, his sister-in-law Janie Hedlund, grandson Armando Hedlund and great niece Zoie Beth. A private celebration of life will be held for Kyle on Saturday, October 21, 2017 at his home in Gilbert, AZ.

Donations in Kyle’s honor may be made to The Phoenix Children’s Hospital Foundation online at phoenixchildrensfoundation.org or via mail at 2929 East Camelback Rd, Suite 122, Phoenix, AZ 85016. Cards of condolence may be sent to 544 N Cambridge, Gilbert, AZ 85233.