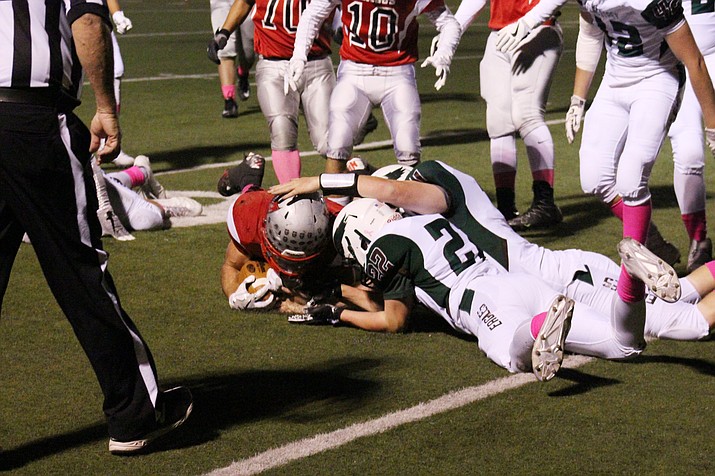 Mingus senior Tyler Kelly recovers a fumble during the Marauders’ 41-10 win over Flagstaff last week. Mingus Union and the Eagles are among the four teams vying for the Grand Canyon championship. (VVN/James Kelley)

This season has been a roller coaster ride so far for Mingus Union football, and it doesn’t look like it’ll be letting up anytime soon.

Mingus Union head coach Bob Young said it’s been a while since the region was this congested this late in the season.

“It used to be pretty common, there was co-champs, tri-champs, but in the last probably five, six years, usually one team went undefeated,” Young said. “That’s not gonna happen (laughs).”

The mess will clear up a bit this week when No. 16 Flagstaff travels to No. 20 Prescott, plus No. 24 Bradshaw Mountain faces the Badgers in the season finale.

However, there still could be a three-way tie.

If Mingus Union, Flagstaff and Bradshaw Mountain win out, then they would all be tied at 5-1 in the region. In that case, the region would be decided by the rankings.

On Friday Mingus Union has a chance to clinch a share of the region championship when they travel to No. 36 Coconino (1-7, 0-4).

“Our best scenario is for us to win and Bradshaw loses and then we’re guaranteed,” Young said. “We can control ours, we can’t control theirs. We’re hoping that Mohave or Prescott can beat them and then we get in.”

On paper the Marauders should easily handle the Panthers, but losing 45-16 to previously winless Bradshaw Mountain on Sept. 29 is what got Mingus Union into this mess.

If the Bears win out and Flagstaff falls, then they will win the tiebreaker since they beat the Marauders.

The loss to BM was shocking since Mingus Union had won two straight since starting the season 0-3, including a spanking of previously undefeated Lee Williams.

Coconino’s only win came against 3A Page, but don’t count the Panthers out. This is a classic trap game that sports pundits love to talk about in between arguments about Colin Kaepernick and who the “Greatest Of All Time” is.

Before the season Young said Mingus, Flagstaff, Prescott, Bradshaw Mountain and Coconino would be the main Grand Canyon contenders.

The Weather Channel is forecasting a high of 64 and a low of 32 for Friday for Flagstaff for Coco’s last home game.

“It’s always tough to go up to Flagstaff, it’s going to be cold and Coconino, they’re record doesn’t indicate it but they play really hard,” Young said. “They’ve always played hard against us, so we expect a battle.”

Meanwhile over in Prescott, the Badgers host the Eagles, two teams smarting from routs at the hands of Mingus Union the last two weeks.

Flagstaff figures to have the edge, they were atop the region the whole year and now suddenly they likely need to win out and get a lot of help to get into the playoffs, so they should be angry. They’ve dropped to 16th in the rankings and need Bradshaw Mountain to their final two games.

Prescott probably also needs help to get in, at 19th, they need to of course beat Flag and BM but also Mingus Union to lose at Coco.

As if this region isn’t crazy enough, Prescott comes into the game with a 5-3 record, but 0-3 at home.

After Mingus Union wraps up region play this week, they host No. 2 Sunrise Mountain (7-1, 3-0 West Valley) next week.

Just playing the second ranked team in the last game could help the Marauders’ playoff hopes if they don’t get the Grand Canyon Region’s automatic bid.

Or not, who knows.

What a season it has been atop the Grand Canyon.