Movie Review: ‘Only the Brave’ tells story of elite firefighting crew who lost their lives in Yarnell 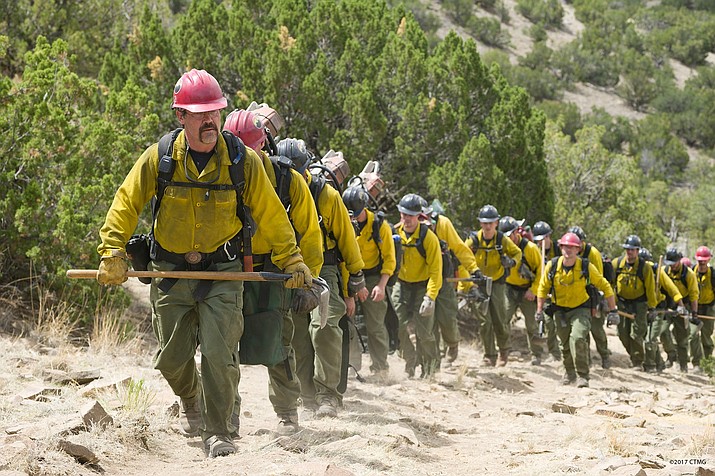 Only the Brave is the story of the elite firefighting crew that lost their lives in a historically large wildfire in Arizona in 2013. Most of the film is focused on events leading up to the disaster. We learn of the struggle this team faces to achieve the designation Hotshot Firefighters.

Only the Brave is the story of the elite firefighting crew that lost their lives in a historically large wildfire in Arizona in 2013. Most of the film is focused on events leading up to the disaster. We learn of the struggle this team faces to achieve the designation Hotshot Firefighters. That is a status that recognizes the extraordinary courage and special training the men have that allows them to be the leaders in facing wildfires that are too big for water hoses and some chemicals.

Only the Brave is the story of the elite firefighting crew that lost their lives in a historically large wildfire in Arizona in 2013. Most of the film is focused on events leading up to the disaster. We learn of the struggle this team faces to achieve the designation Hotshot Firefighters.

In that story of their effort to get the Hotshot status, the film presents a pretty detailed, close look at the lives of some of the principal members of the crew. The crew members are men of physical strength, lovers of fun and beer, bonded to each other and playful when off duty. Many of the 20 are married, some with children. All their frisky attitudes are completely suppressed when they are on the job against a wildfire.

The leader of the team is a veteran fireman, Eric Marsh (Josh Brolin). He is addressed as ‘Supe’ by the men under him. Eric is fully dedicated to his position, which causes friction with his wife, Amanda (Jennifer Connelly). Eric and Amanda are a loving couple, married for several years and she wants to have children. His devotion to his duty keeps them apart for many days and weeks at a time. At one point in the film, starting a campaign against a wildfire in another area of Arizona, Eric says, out loud to himself, “If this isn’t the greatest job in the world, I don’t know what is!”

Eric interviews a young man who wants to join the crew. Brendan McDonough (Miles Teller) has served time in prison, and is a drug addict trying to get straight. Eric likes his attitude and takes him on. Brendan is facing another problem. He has impregnated a young girl on a one night stand a few months earlier. She rejects his attempts to accept his responsibility, but he persists.

Eric finally gets his team to pass the tests to be designated Hotshot Firefighters. They adopt the name, ‘Granite Mountain Hotshots.’ They continue to be successful in their missions. Then in 2013, they get a call to face a fire in Yarnell, Arizona, about 30 miles south of Prescott. It seems like a fire that is somewhat aggressive, but not the worst they have ever seen. The abundance of forestry and the changing weather conditions build it into the tragic event, the Yarnell Hill fire.

Josh Brolin’s performance as Supe, is very special. He’s the man in charge, but he is human and we see some points at which he isn’t totally sure of the best procedure. Jennifer Connelly also is excellent as his wife, strong of character, in love with him, but wanting more of him.

Other characters in Only the Brave are well played, including Jeff Bridges as Eric’s superior in the firefighting corps. He’s far off the personality of his last few roles (Rooster Cogburn, e.g.) and he performs a musical number with a local band in a Prescott bar. A large role is played by Brendan, and he is very good.

The fire scenes are awesome and are fully convincing as to the courage needed to be a Hotshot. (Outstanding views of the Arizona landscape beauty are not neglected.) The ending of this terrible event is well known, but Only the Brave fills in the background and the substance of the heroism involved. It is a very worthwhile film to see.

Only the Brave is at Harkins Sedona 6 Theater.