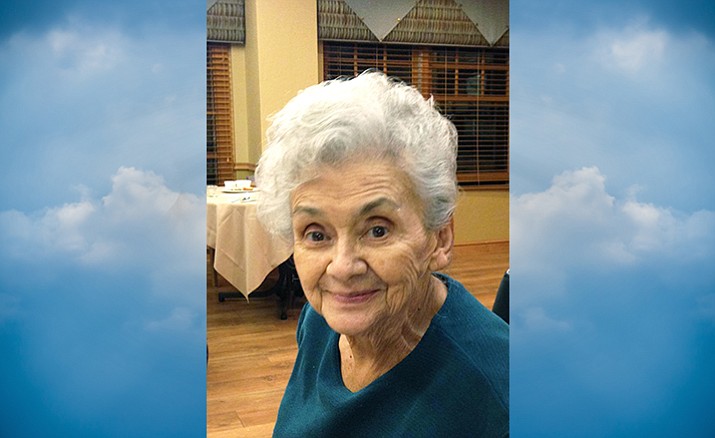 Delores Louise Muesch passed away on October 19th, 2017 in Flagstaff, AZ. Born May 1st, 1928 in Trinidad, CO, she was the second daughter of Placido L. and Helen (Arellano) Maes. Delores spent her early years in Trinidad, CO where she met the love of her life, Joseph F. Muesch. Their family business took them to Las Vegas, NM, then Flagstaff, AZ, before they retired to Cottonwood, AZ.

Delores was a wonderful cook, homemaker and mother. Through the years she was involved at many levels of Boy Scouts and Girl Scouts, was active in the PTA, the St. Pius X Rosary Altar Society and the Northern Arizona Porcelain Artists Guild. She was a talented artist whose media included quilting, needlework, oil and acrylic painting, ceramics, china painting and doll making. She also enjoyed traveling, camping and the outdoors. Although she had many interests her family was the center of her life.

She was preceded in death by her husband, Joseph, and her sister, Bette Scherer. Survivors include her four children: Gary Muesch of Lakeside, Jolene (Arnold) Ragsdale of Tualatin, Oregon, Mark (Donna) Muesch of Flagstaff, and Denise (David) Helm of Cornville. Grandchildren include Patty Madson, Deanna Sanderson, Kristin Ragsdale, Eric Muesch, Theresa Orozco, Jason Muesch, and Ethan Muesch. Other survivors include numerous great-grandchildren and great-great-grandchildren, as well as six nephews and nieces. She will also be missed by friends and caregivers.

Funeral services will be held at Nativity Catholic Church in Flagstaff, AZ on Friday, October 27th, 2017. The rosary will commence at 10am with Mass to follow at 11am.

In lieu of flowers the family suggests a donation to Catholic Charities (CatholicCharitiesAZ.org) or the Alzheimer’s Association (alz.org). Arrangements are by Lozano’s Flagstaff Mortuary, www.FlagstaffMortuary.com.