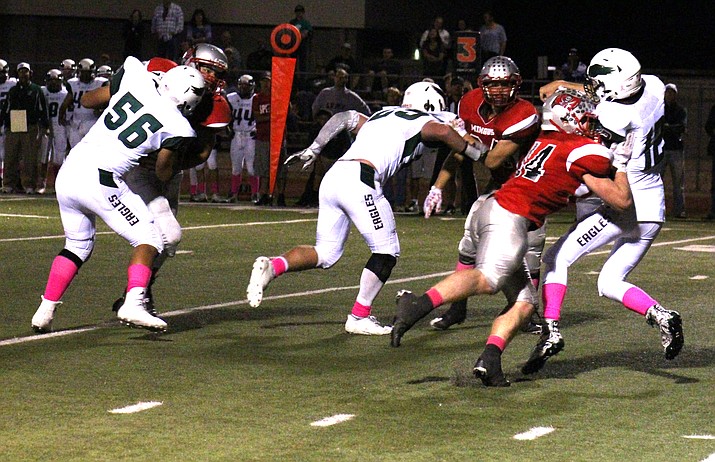 As a fullback and tight end of offense and middle linebacker and pass rushing outside linebacker, Streck has shined this season for the No. 16 Marauders.

“He’s had a great year, great year I mean offense and defense,” said Mingus head coach Bob Young. “Defensively after the Bradshaw game, we kinda moved him to outside backer, he had been playing inside. He’s just been tearing it up ever since.”

Streck has “rarely” come off the field the last five games Young said. The Marauders are 4-1 in that span.

Streck is second in the region in sacks with nine and fourth in tackles with 98, 29 solo and 10.9 per game.

Young said moving Streck to outside and to rushing the quarterback has been a “huge difference.”

With Streck blocking on offense, junior Chaz Taylor has had the chance to catch a lot of balls, he’s first in the region in receiving.

“He’s just a really good athlete, he can do whatever we need him to do,” Young said. “I think next year he’ll have more opportunities, we just needed him to block and he’s been a real good teammate a far as being willing to do that, he knew we had to have extra blocking.”

VVN: How’s the season been going for you do you think?

Streck: It’s been going good, we started off a little shaky but we really became a brotherhood and it’s just a good team now.

VVN: How well do you think the team is playing right now? Do you think it’s getting close to hitting that peak?

VVN: How about for you personally?

Streck: I definitely had my best games the last few games, so I hope I just keep moving up and have a better game.

VVN: What do you like better, offense or defense?

Streck: It’s just, I don’t know, I like hitting people and just being the captain of the defense and just running it is fun.

VVN: What’s it like when you get a sack?

Streck: It gets really hyped, like nothing else is really happening, you just get up and see all your buddies, cheering on, so it’s just awesome.

Streck: It’s just a brotherhood that doesn’t really get honored in any other sports.

VVN: In track I noticed that you’re a thrower and a sprinter too, it seems pretty rare because usually throwers are like linemen and sprinters are usually a back or a receiver, what was that like?

Streck: It was pretty fun, it was interesting, you know?

Streck: I got born into it.

Streck: It’s been going good, been getting my grades up, I just hope to go to college on that, you know?

VVN: You kinda answered it already, but have you thought about what you want to do after school?

Streck: Yeah, I want to play football in college and then go into business and open up a gym.