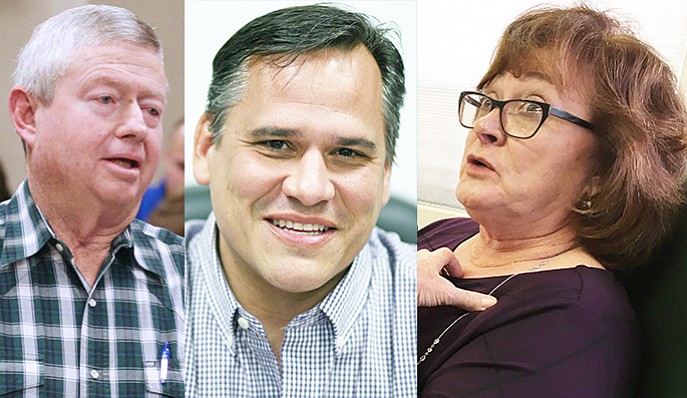 At 4 p.m. Wednesday in the Mingus Union High School library, governing boards of the two school districts will meet to discuss the formation of a committee to see if consolidation of the two districts is beneficial.

In September, Mingus Union Superintendent Dr. Penny Hargrove said the committee would likely be comprised of stakeholders from the district, including teachers, classified staff and community members at large.

Wednesday’s meeting should clarify which demographics need to be part of such a committee.

According to Jason Finger, board president of the Cottonwood-Oak Creek School District, the committee would “ideally be comprised of one or two board members and one or two staff members from each district, one or two parents who ideally have children in both districts, and three or four community members who have a particular specialty in budgets or finance.”

Groseta said that “some members” of his pro-consolidation/unification group “would be interested in serving on this task force.”

“Of course this would be subject to both boards agreeing to do that,” Groseta said. “I think that our working group can provide some valuable insight regarding the cost savings that can be achieved if both districts unified. Our group has done their homework and could bring a lot of information and ideas to the table.”

As for what the committee would be charged with doing, Finger also said that it “should be responsible for researching questions that the board presents during their discussions pertaining to legal matters, logistics, and finance; and should not be a committee that debates the merits of consolidation.”

Simply put, the committee’s main function would be to deliver facts to both the boards, said Mingus Union Board President Anita Glazar.

“We want these decisions to be data driven,” Glazar said. “We’ve got to get the data. It’s a complicated issue. The committee can bring both the pros and the cons to each of our boards.”

As for who should not be part of the consolidation committee, Groseta, one-time Mingus Union board member, said in an email to the Verde Independent that there “should not be any superintendents involved in this process.”

“Both school business managers need to be available as a resource to the committee,” Groseta also stated. “The committee should not be stacked with board members and teachers. Community leaders, including business people and parents need to make up the majority of this committee.”

It is not known whether the two school boards will choose committee members at the Nov. 1 meeting.

According to Finger, Wednesday’s meeting would be a success if each board member “is willing or able to share their personal feeling about this committee and unification.”

Finger also said that the meeting would be successful if the Mingus Union and Cottonwood-Oak Creek school boards “can set a timeline leading up to ratification on this issue so that it can be presented to the voters next fall. It will be successful if we can leave with a list of committee members to invite and a schedule for their timely report back to the joint boards.”

Once committee work is completed

Groseta said that his pro-merger group is “hoping that the task force work be completed by May 2018 and then both boards can draft a resolution to unify/consolidate and vote on this issue at their June 2018 board meetings.”

“The purpose of the task force is to be of fact finding in nature and to conduct the required due diligence to provide both boards with sufficient information to make a decision whether to unify or not,” Groseta said.

The district will post a copy of the agenda no less than 24 hours before the meeting. The agenda can be found at www.mingusunion.com/Governing_Board.