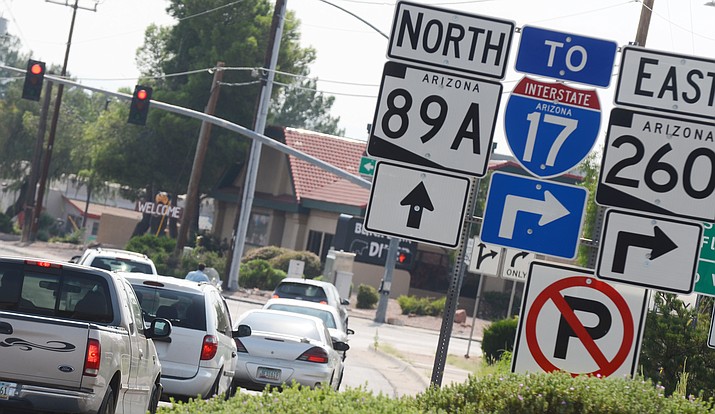 The Cottonwood City Council has identified the intersection of SR 89A and SR 260 as the No. 1 transportation priority in the Verde Valley. VVN/Vyto Starinskas

COTTONWOOD – Should the intersection of SR 89A and SR 260 in Cottonwood be improved?

It is a project that is being considered.

Tuesday, Cottonwood City Council gave staff direction, naming the intersection as the No. 1 transportation priority in the Verde Valley.

Congressman Tom O’Halleran has requested a list of regional transportation projects to include in an upcoming infrastructure bill.

Projects that have the most regional impact and influence on the economy will be favored.

Sept. 13 at 10 a.m., representatives from all the Verde Valley communities will be meeting at the Cottonwood Recreation Center to discuss regional priorities.

City Council received a letter from Northern Arizona Council of Governments (NACOG) explaining the program and process, along with a list of projects that are priorities based on regional transportation project. Based on this list, city staff has separated out the projects in and around the Cottonwood area and put together a draft priority list.

Improving the intersection of SR 89A and SR 260 was a project in particular that staff asked Council to consider recommending as a top priority.

Staff said that this intersection would likely have the greatest local impact because of the following reasons:

• Few other projects in the Verde Valley would benefit as many residents as this intersection.

• Nearly all communities in the Valley will benefit from and support the improvements to this intersection and therefore we are more likely to receive funding.

• The growing congestion in the intersection is not only an inconvenience to the traveling public, but becoming a threat to public safety personnel’s ability to respond quickly.

• This intersection services the main commercial corridor of the Verde Valley and will have a substantial impact on business and business development in the area.

• As normal growth continues the intersection level of service will continue to decrease.

• ADOT is planning on directing traffic from I-17 to Sedona through Cottonwood after the SR 260 project is complete which will substantially increase the load on this intersection.

• This study and project would take into consideration bicycle facilities and 89A and SR260 were the primary focus of the League of American Bicyclists.

When asked if he agreed with the recommendation, City Manager Doug Bartosh said, “Absolutely.”