Camp Verde athlete of the week: Injury free Smith racks up goals for Cowboys early on this season 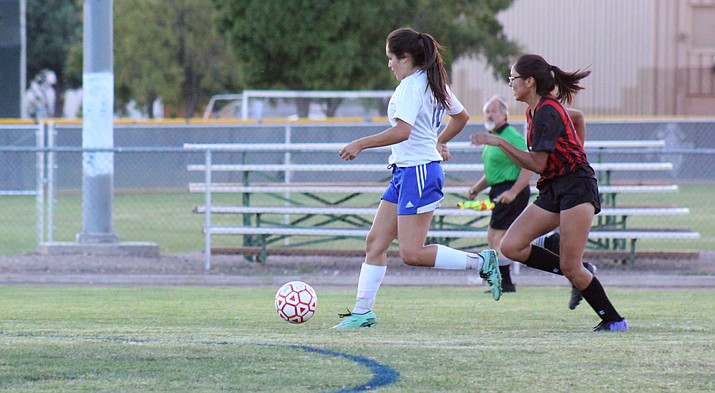 Camp Verde junior Tyra Smith dribbles past the Page defense en route to her first of three goals against the Sand Devils on Tuesday night at home. Smith also had a brace in Camp Verde’s 5-1 win at Holbrook. (VVN/James Kelley)

“The last two years of high school she’s had injuries during the season and she hasn’t been able to play, so this is like the first season she’s been consistently able to play and she’s been doing really good,” Reay said. “She scored two goals against Holbrook early in the season and then the three (Tuesday) night, so she’s been a good scorer for us.”

Smith is also a star on the basketball court and softball diamond for the Cowboys.

“Well it’s hard when you want the player all to yourself but she’s so athletic and she’s good at whatever she does,” Reay said. “I think she just has an athletic personality and she wants to compete.”

“She does pretty good in everything she does, she’s an excellent athlete,” Reay said.

VVN: How’s the soccer season been going for you?

Smith: We’re off to a different start than last year but I think we’ll start working together a little bit more, so it will be good.

VVN: Is it hard starting the season with so many matches on the road?

Smith: Uh, kind of but we’re better than what we’ve been showing so far.

Smith: Before the last game I was struggling a little bit but I’ve been working on my shots a little more, so (Tuesday) night helped a lot.

Smith: It feels pretty good. It just gets you going, once you get one goal you want to get more in there after.

VVN: How many goals did you have before? Did you kinda explode in that game or were you building toward that?

Smith: I kinda just came out on the last game like, I scored a couple before that but this one by shots were on.

VVN: Yeah that makes sense. Is it hard to play a lot of different sports or is it fun? Like some kids play two sports and they have a break in fall or winter, is it hard balancing with school and everything?

Smith: It’s kinda hard like with the grades and stuff but I try to keep a focus on school and I’m just used to it because I’ve been doing it for a while.

VVN: How’s school been going so far this year?

Smith: Pretty well, there’s a couple classes that I struggle in (laughs) but I’m trying to work hard.

VVN: And how good do you think this team can be?

Smith: I think we’re going to get a lot better than we are right now. We just have to keep working together.