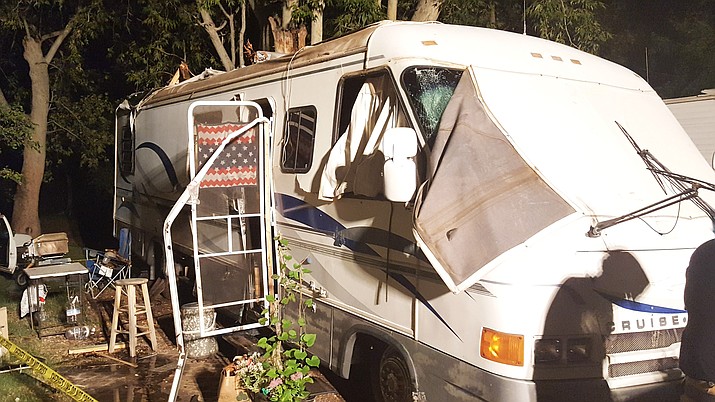 Verde Valley Fire District, Sedona Fire District, and Verde Valley Ambulance responded to a report of a commercial fire at the 1900 block of North Page Springs Road Thursday evening. One man was flown to a burn center after sustaining significant injuries. (Photo Courtesy of VVFD)

CORNVILLE – One man was flown to a burn center after sustaining significant injuries from a motorhome explosion that occurred around 7 p.m. Thursday.

Dispatch reported that there was an explosion in a motorhome with flames and smoke showing, said VVFD Assistant Fire Chief Joe Moore in a news release.

Upon arrival, the crews found a Class A motorhome with significant structural damage and a small fire in the rear of the RV.

One male patient in his sixties was in the RV at the time of the explosion, according to the release.

He was treated for significant burns to the majority of his body by crews and then flown to Maricopa Burn Center from the scene for continued care.

The cause of the explosion is still under investigation.